Today's recipe for Make-Ahead French Toast comes from About.com. (Link will take you directly to the recipe.)
This isn't our usual fare, but it is baked, and this was a slightly crazy week for Archi and myself, which threw Ruth and the others for a bit of a loop as well.
"French toast sounds interesting," Ruth remarked. "I don't think I've done that before. What is it? And why is it called 'French'?"
I blinked, a little surprised at the question. "Um, I'm not really sure. No one seems to know if it's actually a French recipe, and it's got several different names in various languages. The French themselves tend to call it 'pain perdu' which means something like 'lost bread'. It seems to have been invented originally to use up stale bread without it tasting stale."
"Reclaiming stale bread?" Ruth asked, sounding intrigued. "That sounds like a good recipe to know. May we try it?"
"Sure!" I agreed. "It works best with extra-thick cut bread, or dried out or stale bread. Probably work even better with thick-cut half-stale bread."
"All your bread is wrapped up in 'plastic', though," Ruth pointed out.
I smiled. "If I pull some bread out of its plastic and stick it in the oven, I can dry it out a little fairly quickly." Sticking it in the oven keeps anything from getting at it, but still lets it dry. If you really want to speed things up, put the oven on very low heat, about 200°F/95°C.
So, with our dried bread prepped, let's get started! 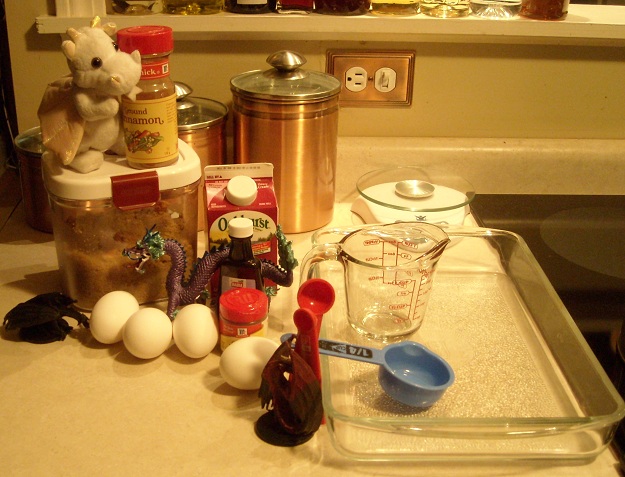 Here we have nearly everything we need for the Make-Ahead French toast. I say 'mostly everything' because the bread is still in the oven drying--if you use fresh bread with this recipe it'll get really soggy and want to fall apart.
Ruth has the cinnamon and is standing on the brown sugar. Hi-chan has woven herself between the cream and vanilla to make sure Black has the eggs well in hand. One of the eggs rolled in front of the nutmeg and hit Red in the wing as he was wrangling the measuring spoons and measuring cup. "Hey!" Red objected. "Watch where you're rolling those!"
"It escaped, sorry!" Black apologized. "Why are you putting things in the baking dish anyway? Don't we need that to mix stuff in?"
"Oh yeah," Red answered sheepishly, picking the measuring spoons back up. "I forgot." Everyone started laughing.
"Well, it isn't like there's much counter space to put things on anyway," I reassure the small dragon.
It's probably a good thing the plastic wrap didn't get brought over--there's no space for it! Of course, we've also forgotten the whisk. 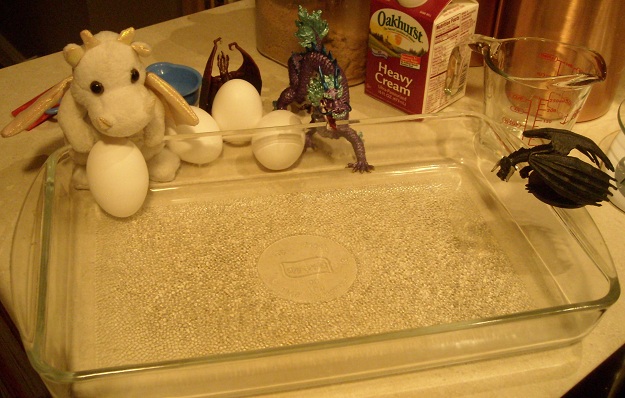 Once everything is pulled back out of the baking dish, Black perches herself on one handle to supervise while the others wrangle the four eggs. 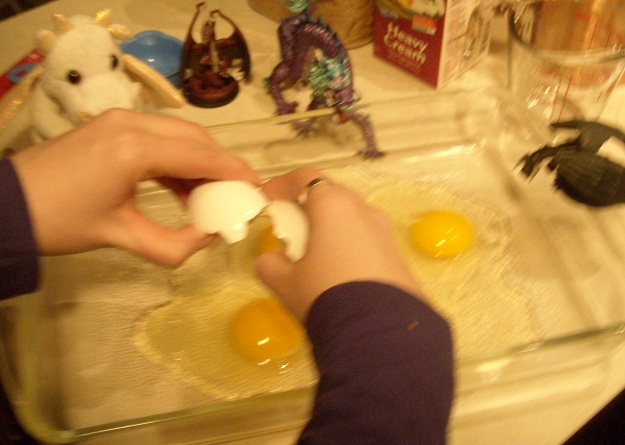 Ruth hands me each egg, and I carefully crack them into the dish. Black finds the spread-pattern intriguing. 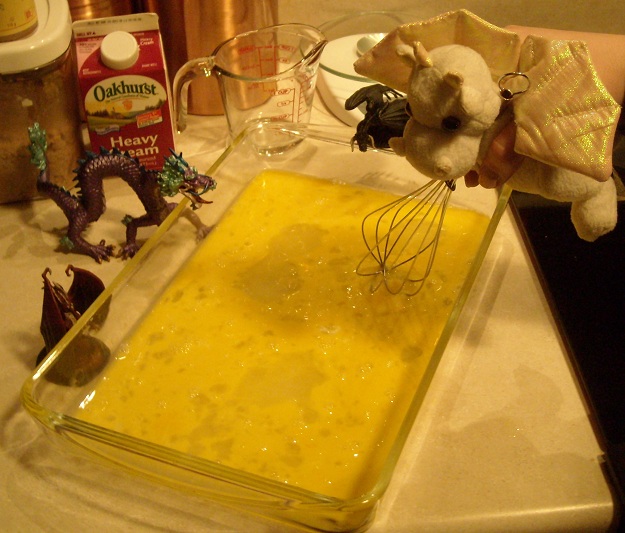 Ruth likes the whisk best for beating eggs. Make sure the yolks are broken and mixed in quite well with the whites. 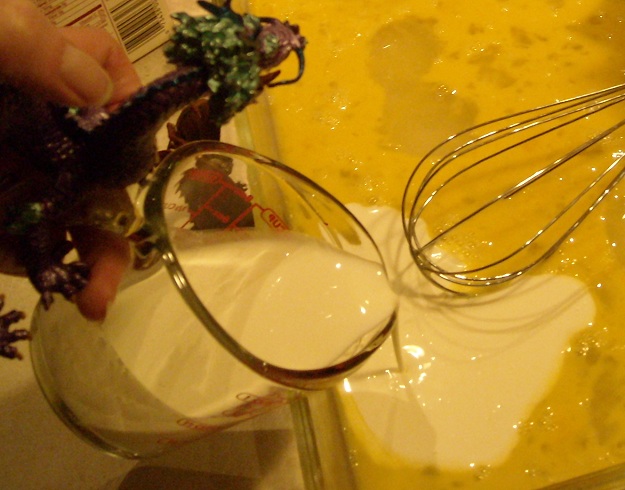 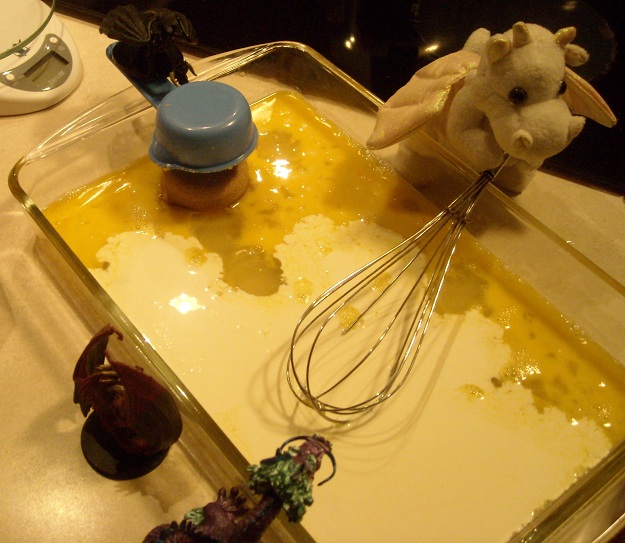 Black happily adds 1/4 cup packed brown sugar (60g). She giggles as it lands with a soft plop beneath the measuring cup. Everyone else seems more interested in watching the spread pattern of the cream. 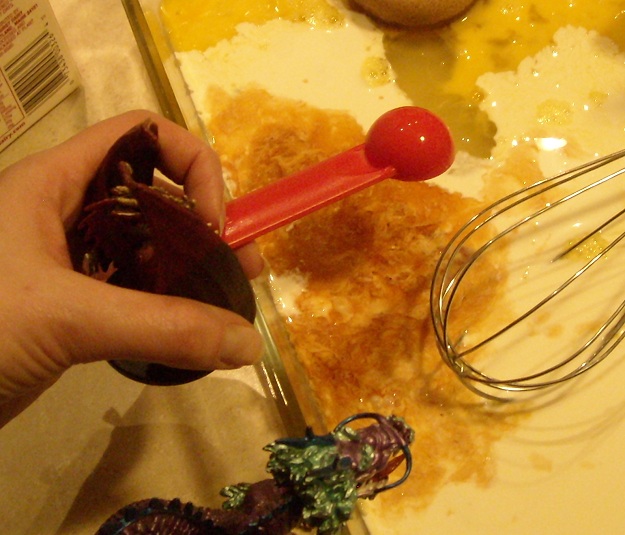 Red takes charge of the measuring spoon to add 2 teaspoons of vanilla. This gives a nice touch of flavor to the French toast. "Oh, that's neat," Red remarks, watching the pattern the vanilla makes in the milk as it spreads out. 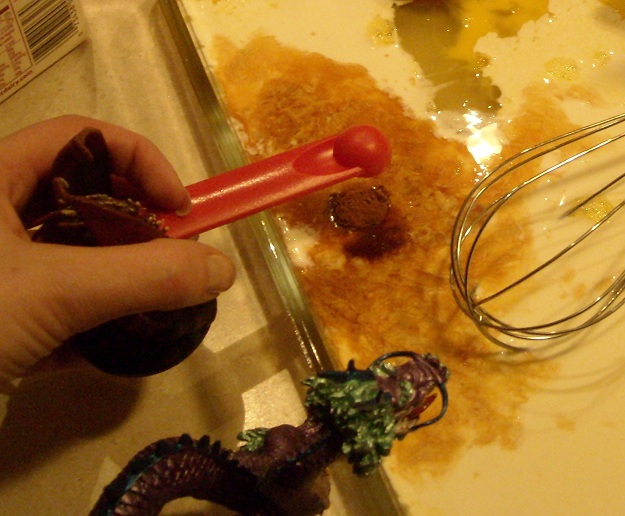 Red also insists on being the one to add the cinnamon, and neatly dumps in 1/4 teaspoon. Spices can be adjusted to taste. Archi and I both like cinnamon, so that quarter-teaspoon was a touch bit heaping. 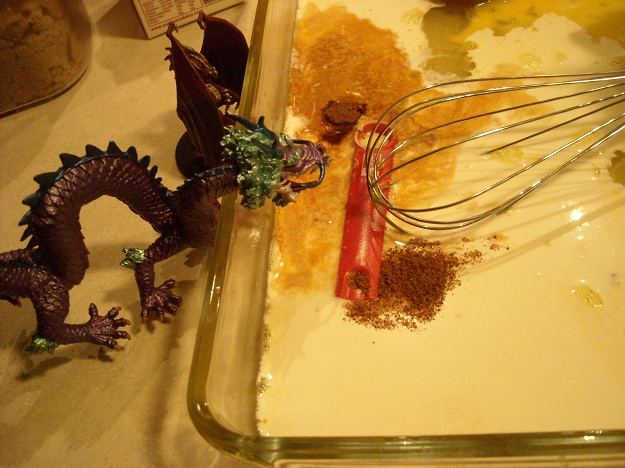 "Oops," says Hi-chan as she loses control of the 1/4 teaspoon measure. "I didn't mean to add the spoon."
"Hi-chan!" Red objects, upset. "You were only supposed to add the nutmeg!"
"Sorry... I'll fish it out."
"No fish!" Red yelps. "Just nutmeg! And no spoon either!"
Hi-chan gives Red a confused look for a moment. "What fish? I'll get the spoon out. The nutmeg is in already at least, and there isn't anything else we need that measuring spoon for."
"Fortunately," I agree, grabbing the spoon before Hi-chan has a chance to. "And the spoon washes easily enough, Red, calm down." He continues pouting. 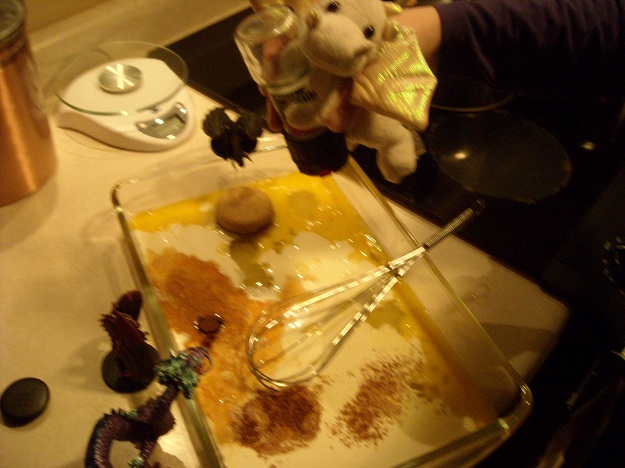 Ruth sets the whisk down long enough to add a pinch of salt. He really likes the whisk! 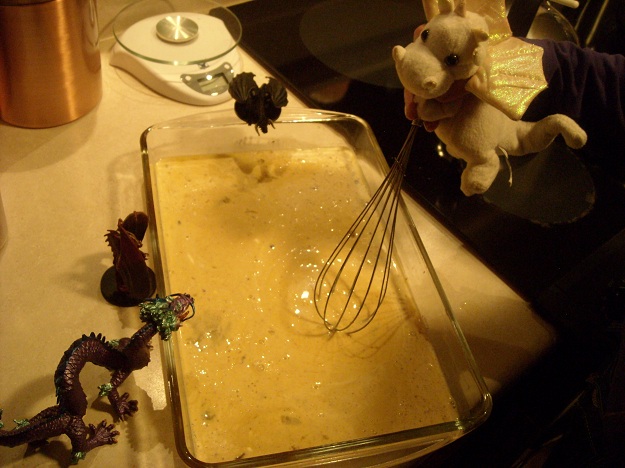 The salt was the last of the ingredients that go in the 'batter', so Ruth takes up the whisk again to mix everything together. Make sure it's all mixed in well so you get a consistent color throughout, or you'll wind up with patchy French toast that won't taste quite right. The picture was taken just as Ruth finished mixing. 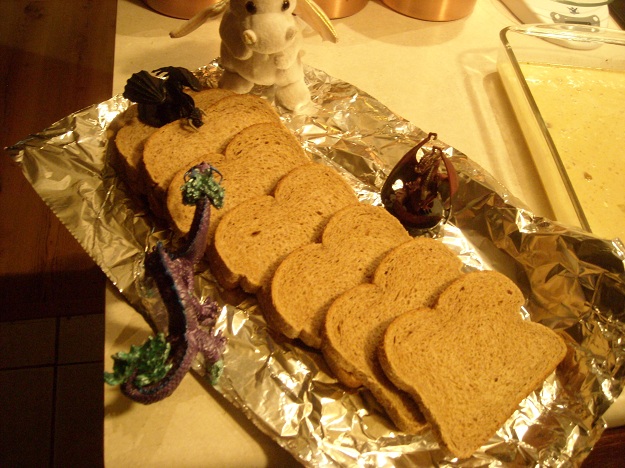 I pulled the partly-dried out bread from the oven, and the dragons immediately pounced on the chance to inspect it. "It isn't a thick cut," I explain, "but this should work well enough."
"Dry bread!" Black observes as she hops up on the end piece.
"So this is the kind of bread you use for 'French toast'?" Ruth asks, watching the others make a close inspection. "It looks like normal bread."
"That's sort of the point, Ruth," I explain. "Actually, you can make French toast with any kind of bread you want. This bread just caught my eye in the bakery section of the grocery store. Any slightly-dried bread will make decent French toast. I've heard of making it with cinnamon-raisin bread, which would give a really rich and very cinnamon flavor to it."
"Ooo, that sounds yummy," Hi-chan agrees. "Maybe we should try that sometime at home, Ruth!"
Ruth nods. "I'd have to scale the recipe up significantly, but it could be a good thing to add to the menu."
"It's made of dried-out bread," Red says, still trying to wrap his head around the idea. "This is definitely dry bread. Ruth usually throws away the dried-out bread. Mom saves it to feed to birds."
"You could probably feed half the birds in Draconaria City with the dried-out bread from Baked Treasure," Ruth remarks. "I'd rather let other people have a chance to feed the birds." 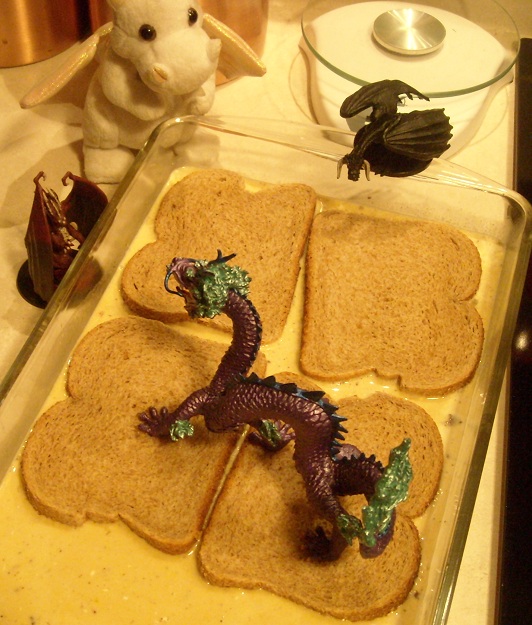 Four slices is all I can get to fit into the baking dish I have. Hi-chan is having fun making sure the bread is decently submerged on one side. Red has decided he doesn't care to risk dipping his wing in the egg mixture, and Black is trying to decide if she wants to jump down or not. 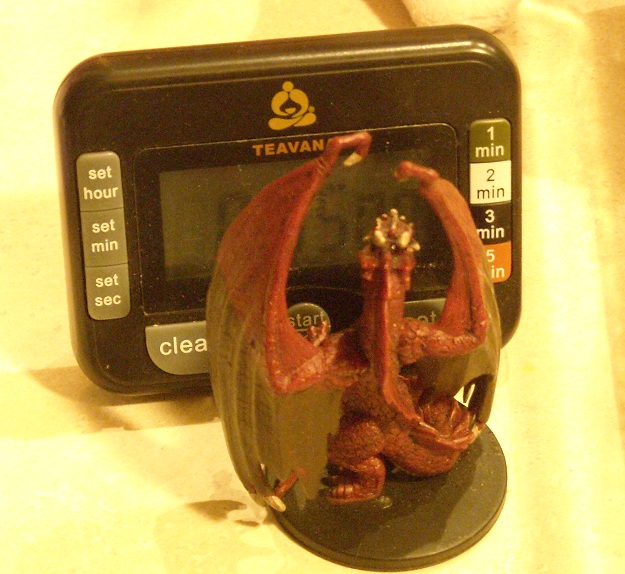 The bread needs to soak on this side for about 3 to 5 minutes, so Red sets a timer to make sure we don't forget to flip it. 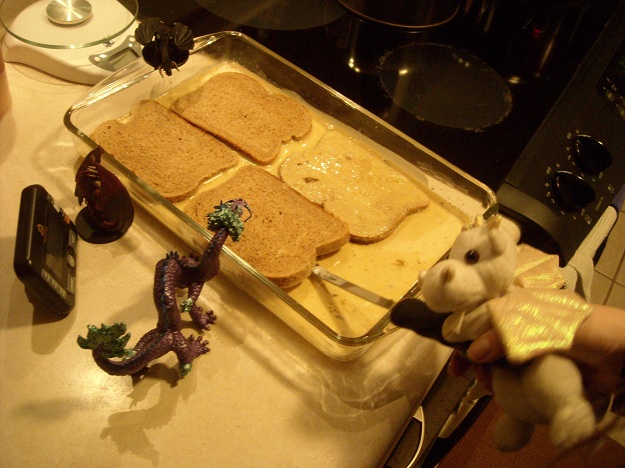 The timer went off, so now Ruth is flipping each piece of bread over, so that the other side can soak. 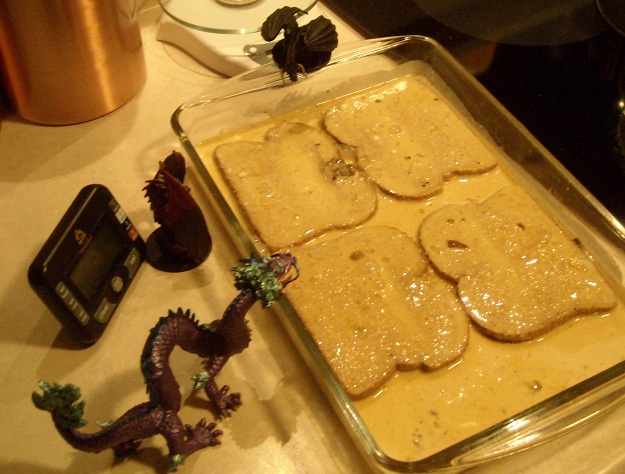 Everyone is looking at the flipped bread, which is now coated with the egg-mixture. Wait, where's Ruth? Oh, he went to get the plastic wrap. 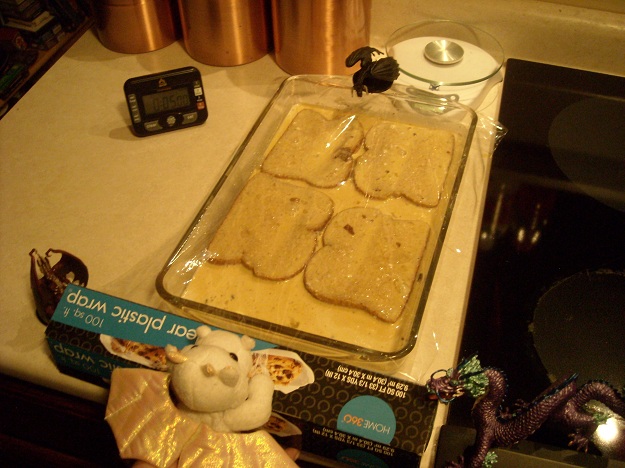 Black holds one edge of the plastic wrap down while the others stretch it over the baking dish and cut it. With the soaking bread thus covered, it's time to stick it in the fridge. Since this is 'Make-Ahead', the idea is to make it up the night before so that it can be baked up for breakfast in the morning with very little prep.
That's it for today! The next part will start in the morning...


You didn't really think I'd cut the post off there, did you? Of course not. From here on out, it's the
Next Morning. 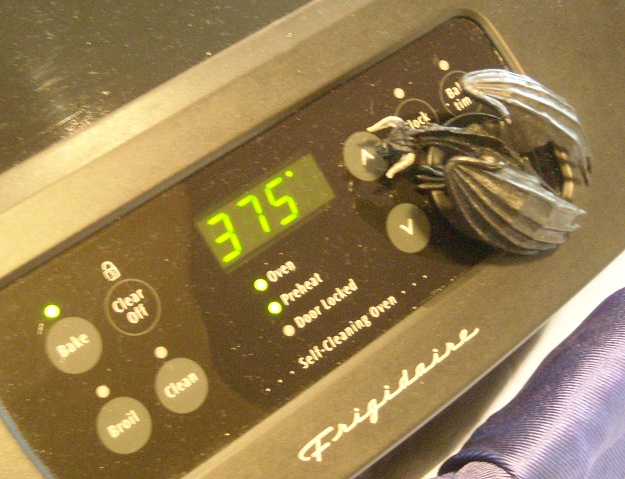 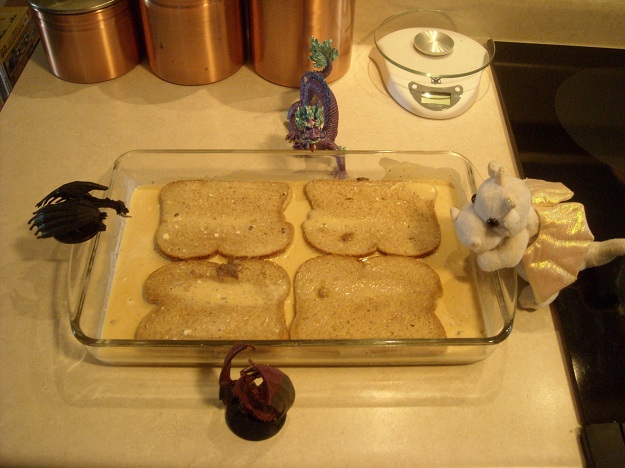 Peel the plastic wrap off the baking dish and toss it out, as its job is done. Everyone is taking a moment to look at the soaked bread. "It doesn't look dry at all now," Red remarks.
"No it doesn't," I tell him. "That's the point. Now we bake it." 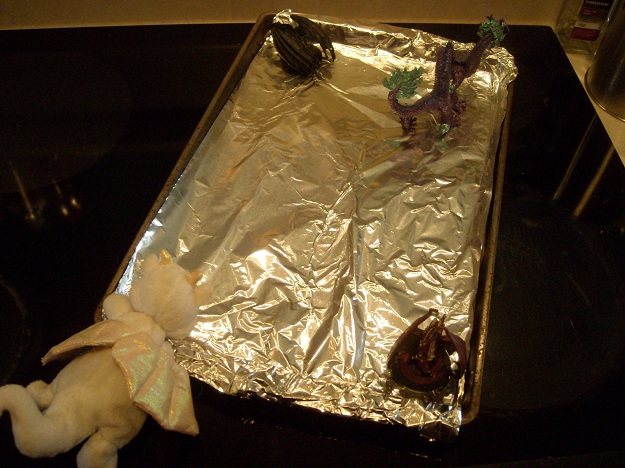 Everyone pitches in to line a cookie sheet with aluminium foil. Once they're all out of the way, I spray it with non-stick cooking spray. You do need the non-stick spray, or you'll end up with foil stuck to the finished French toast. I'm all for getting plenty of minerals, but that's not the way to do it! If you don't have non-stick spray, use a little bit of oil, butter, or margarine to coat the foil, creating a thin barrier that keeps the egg-mixture from attaching itself to the foil. 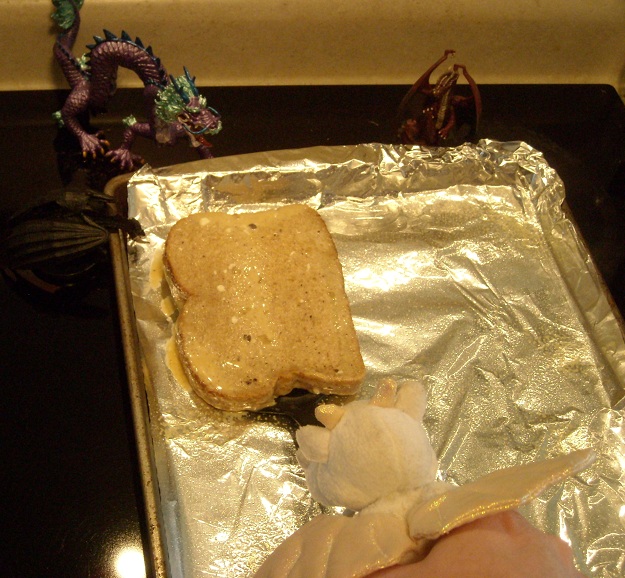 Use a pancake turner or other spatula to pick the bread up from the baking dish and place it on the prepared pan. This is the point at which bread that isn't dried enough will fall apart the most. Soggy bread can be rescued, but it's easier to just prevent the problem from occurring by using dried-out bread. Make sure to place the slices of bread a bit apart on the sheet, so that they don't stick themselves together when baked. You want about a half inch (1cm) or more between slices. 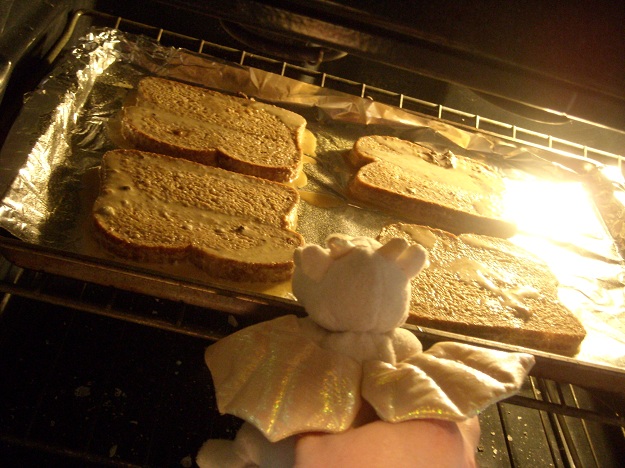 Once the oven is preheated, Ruth puts the pan of egg-mix-soaked bread in. Don't worry if some of the egg-mixture has leaked out of the bread, that's normal. It's also why you don't shove the bread all together on the pan. 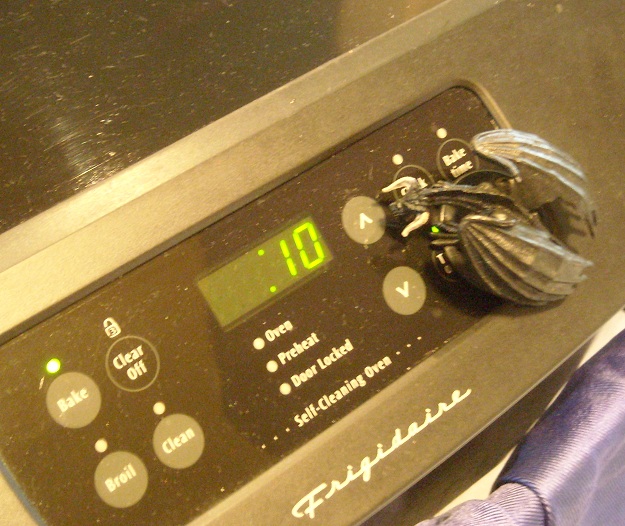 Black sets the timer for 10 minutes. Like pancakes, the French toast will need to be flipped halfway through cooking. Each side gets 10 minutes. 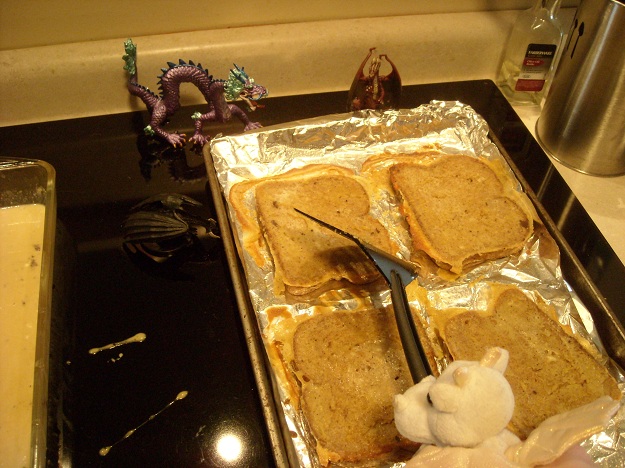 Everyone gathers to watch Ruth flip the half-cooked bread over. (Black blends into the top of the stove slightly, as it matches her coloring.) This is where you'll find out if you used enough non-stick.
Now they go back in the oven for 10 more minutes! 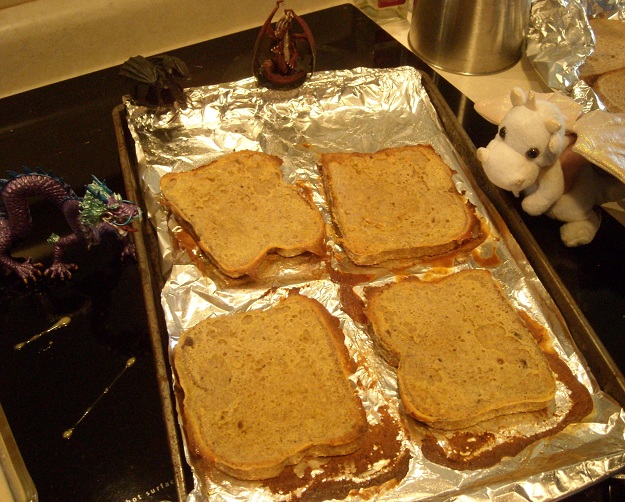 After the second 10 minute stint in the oven, our French toast is ready to eat! Let's plate it up! 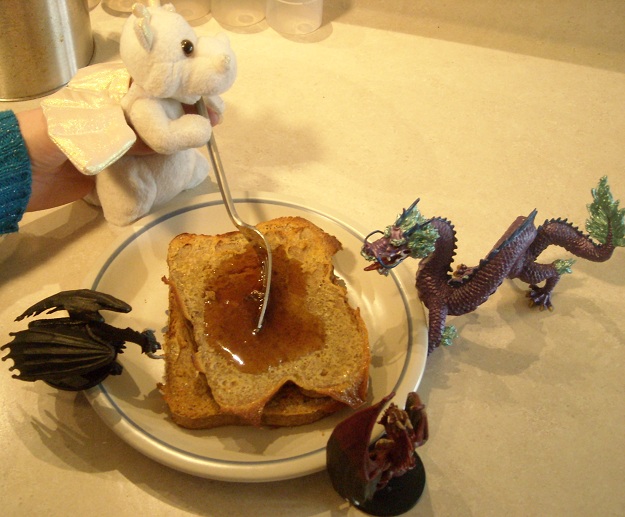 Mm, French Toast! You can top it with quite a number of different things. Jam, marmalade, powdered sugar, or various types of syrup. My home is in sugaring country, so we tend to top it with pure maple syrup from a local sugar-house. Dig in, everyone! Oh, wait, let Ruth cut you a piece first.
Posted by Unknown at 4:00 PM