Today's recipe is Oatmeal Cookies! I got this recipe from a friend a few years back when I was looking for a good way to use up oatmeal quickly. These are quite tasty!
"It's just oatmeal in these?" Red sounds a little confused.
"No raisins or anything?" Black adds, agreeing with her twin that such a thing sounds strange.
"Yup! Just plain oatmeal cookies. Really good oatmeal cookies, though," I assure them.
"Hmm," Ruth remarks. "I suspect these might be popular with Centaurs and such folk..."
"Wouldn't you have to substitute something else for the butter and egg, though?" I asked.
"Why?" All four dragons looked a little confused. "What's wrong with egg and butter?" Ruth asked.
I squashed the slight sense of embarrassment--they're all quite well aware that I know very little about their world. "Um, nothing. I just... well, horses can't eat animal products, as far as I know, so I figured centaurs and such would be the same way."
"But the 'camel' thing the djinni brought liked cookies," Red told me. "I wonder if it would like these?"
"I shall have to keep a stock on hand, in case a djinni stops by again," Ruth said. "Then we could find out."
"You're going to have to tell me about the camel and the djinni at some point," I insisted. "Let's bake first, though."
"Lets," everyone agreed. 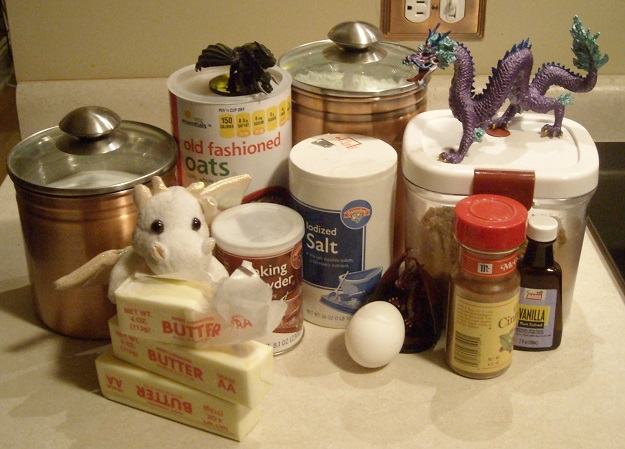 Here we have everything we need for the oatmeal cookies, except for the nutmeg. Somehow we all forgot to get the nutmeg. Black has decided that the oats make a good perch, from which she can see everything going on. Hi-chan has claimed the brown sugar for her perch. The copper canister in the center-rear is flour, while the one behind Ruth is white sugar. Ruth has brought the butter. Yes we actually need 2 1/2 sticks of butter. Tucked behind Ruth is the baking powder, with the salt next to and slightly behind it. Red has the egg, and next to him are the cinnamon and vanilla. It looks like a lot, but the recipe is actually pretty simple to put together. 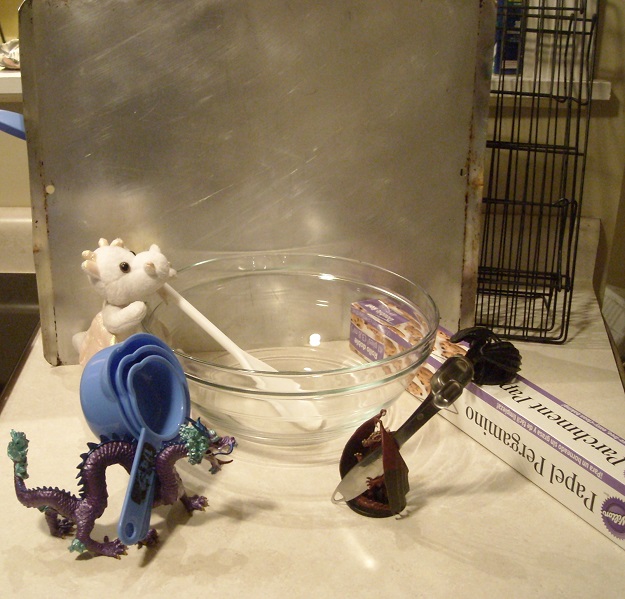 Far less equipment to mess with. In the far back are the wire cooling racks, tucked behind a cookie sheet. It's a good idea to have at least two cookie sheets on hand for this, so that you can rotate them out. Ruth has the bowl and spoon. Make sure you have a big bowl, or you won't have enough room to stir everything in. Black is perched on the parchment paper, partly hiding behind Red with the measuring spoons. Hi-chan has brought the measuring cups.

Black gets us started by setting the oven to preheat. These cookies want to be nice and toasty, so warm the oven to 375°F (190°C). It's still chilly here, so I'm glad to have the oven going and warming up the kitchen. 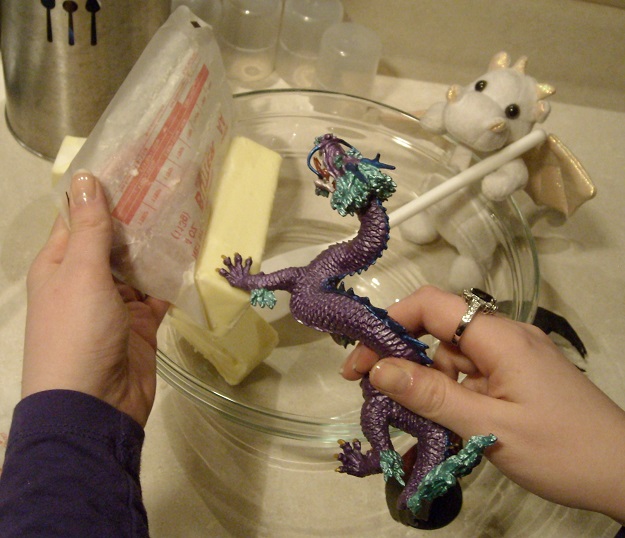 Butter holds these cookies together, so Hi-chan starts by adding 1 1/4 cup (282g) to the bowl. Make sure you take the butter out of the fridge a bit early, so it has time to warm up a bit. Warm butter is softer and a lot easier to work with. If you don't have enough time, you can put it in the microwave for a few seconds, though more than half a minute will melt it and that isn't what you want right now. 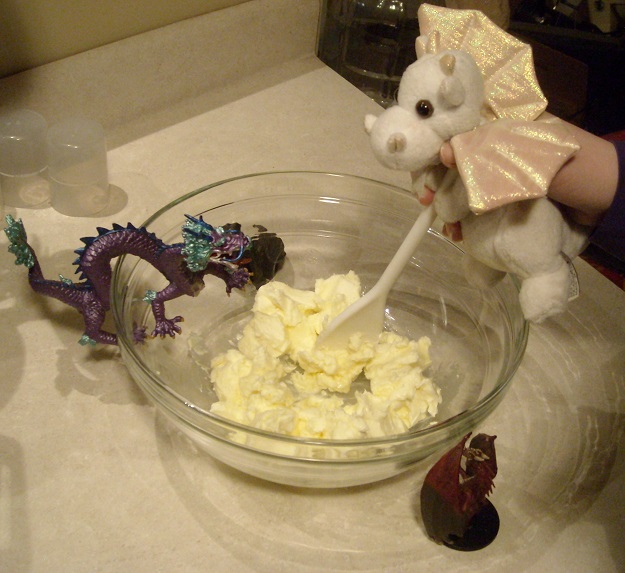 Ruth breaks up the butter so that it'll be easier to stir everything together. 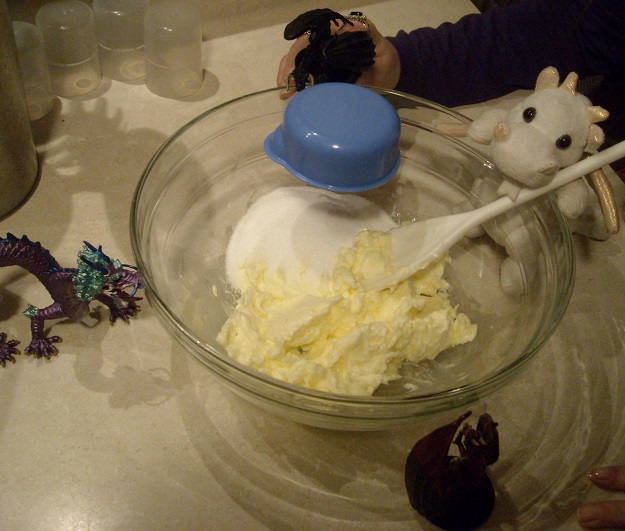 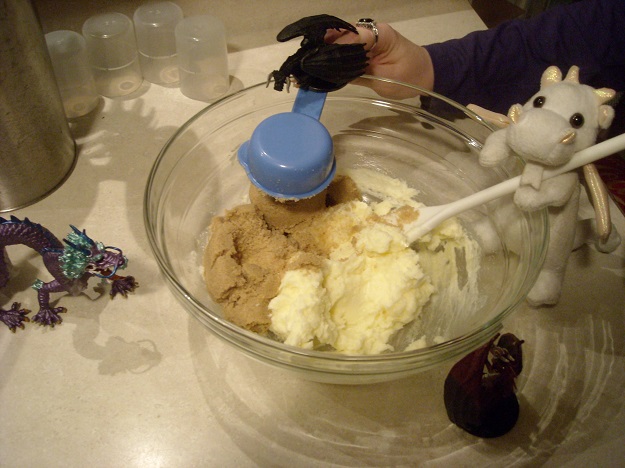 "It stays in the cup shape," Black observes as she finishes adding 3/4 cup (177g) packed brown sugar.
"It has been compacted into the cup," Ruth explains. "That is how one measures brown sugar."
"Why is it brown?" Red wants to know.
"Brown sugar contains molasses," I tell him. "That's what gives it the colour, as well as a slightly different flavor from regular, or 'white', sugar."

With all the sugar in the bowl now, Ruth creams it together with the butter, making sure it's all mixed as thoroughly as he can get it. Black seems almost as interested in the shadow of the bowl's rim as in the mixing. 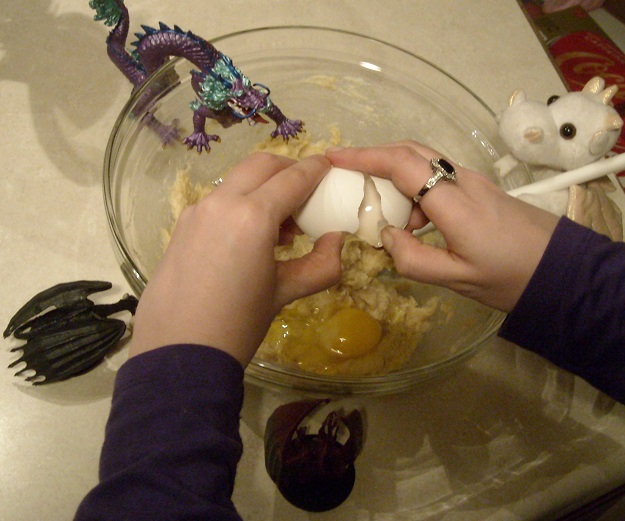 I crack one egg neatly into the bowl, which Ruth promptly mixes into the sweetened butter. 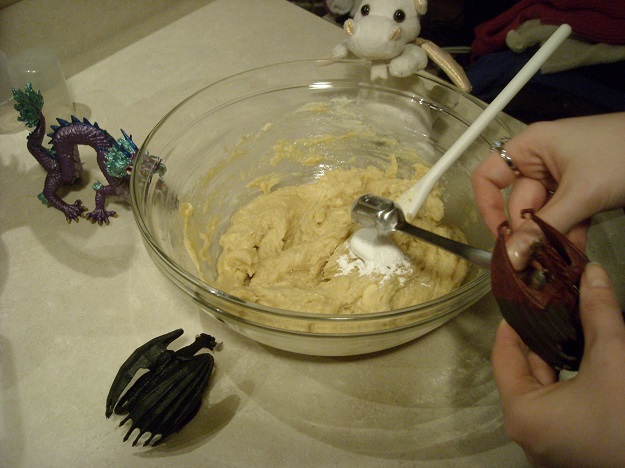 Red's turn! He really loves the measuring spoons. In goes one teaspoon of baking powder, followed by... 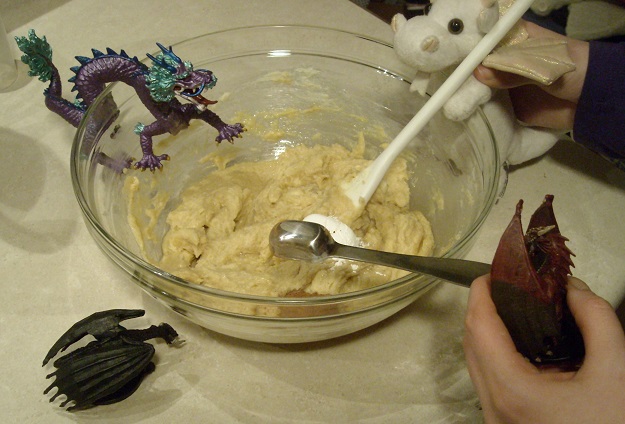 ...one teaspoon of cinnamon, not quite entirely leveled off because we like cinnamon a lot, and then... 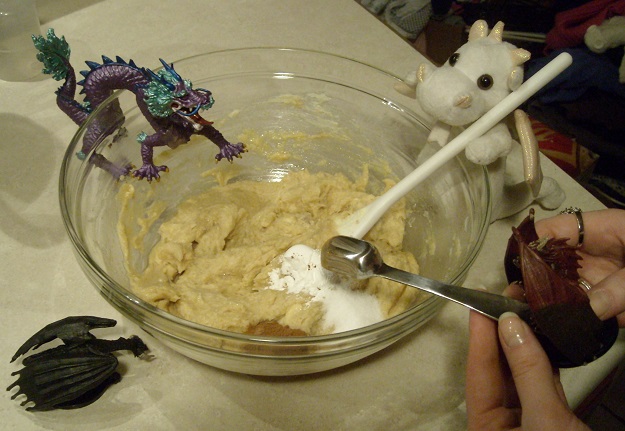 ...one teaspoon of salt, measured much more carefully. Adding too much salt by accident can really ruin a batch of cookies. 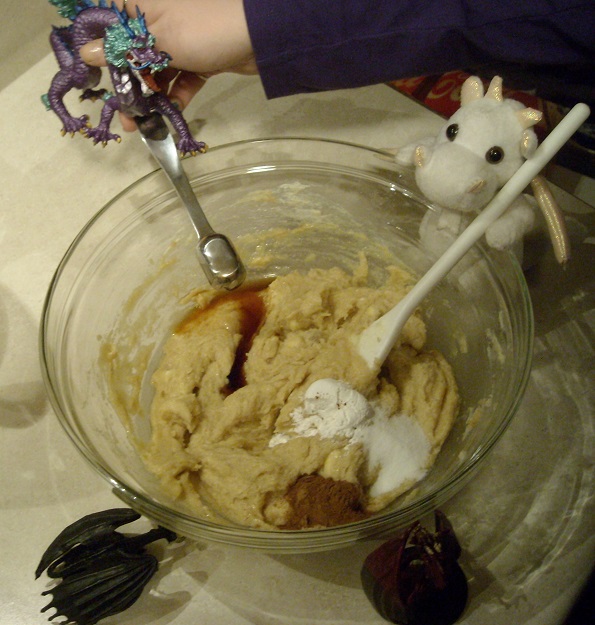 Hi-chan jumps in for a turn, managing to add one teaspoon of vanilla with no measuring-spoon mishaps. 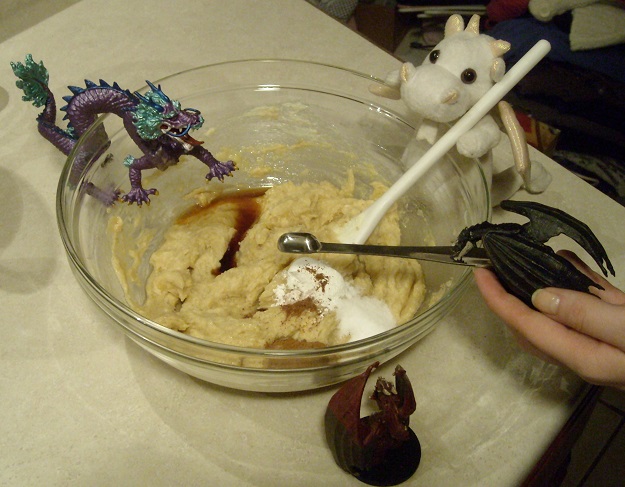 Black claims the honor of adding the last bit of spice, one quarter teaspoon of the nearly-forgotten nutmeg.
Hi-chan is back up on the bowl rim again. 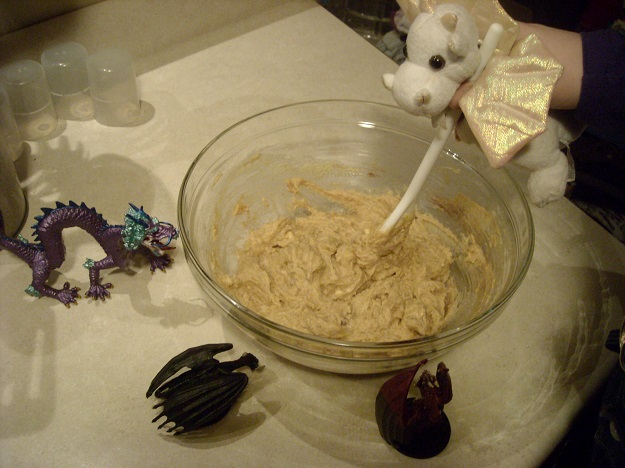 "Hi-chan, please get off," Ruth asks her. "I don't wish to hit you in the nose and I need to stir."
Hi-chan grumbles a little, but complies. "I like the view from the top better."
"Yeah, but from the side you're not risking a bruised nose," Red points out. 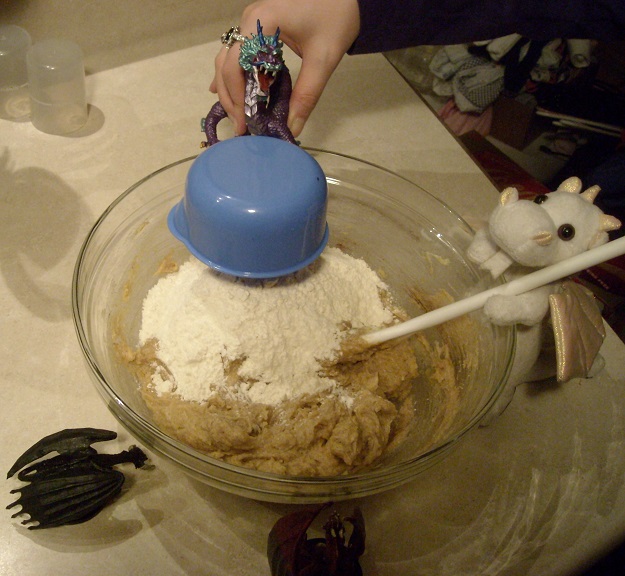 To stop Hi-chan's pouting, I convince her to come help me measure out the flour and add it in. She's quite pleased to add 1 1/2 cups (211g) of flour, especially as it gives her a chance to be up at the edge of the bowl again. 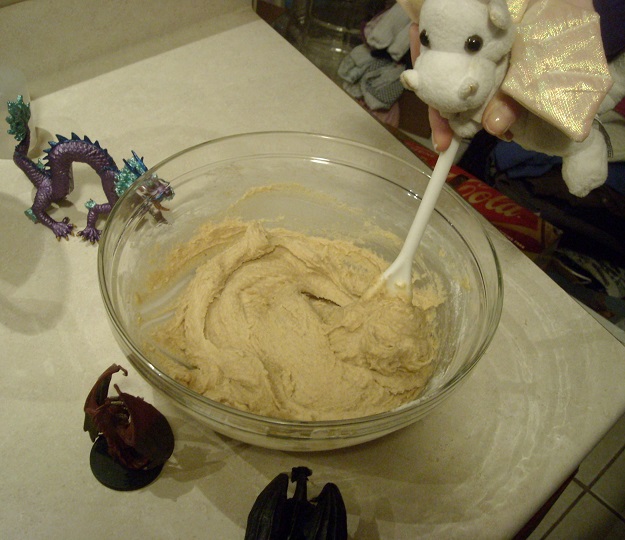 Now that Ruth has stirred in the flour, it's starting to look like cookie dough. Just one more thing to add. 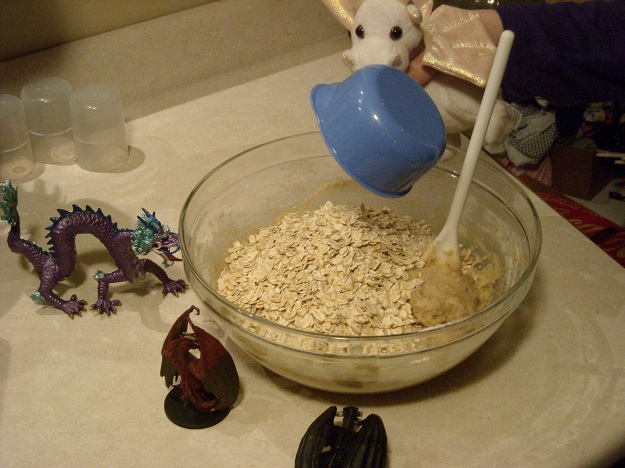 Can't have oatmeal cookies without oatmeal! Ruth takes the honor of adding the eponymous ingredient. "Of course the star of the show turns up last," Black teases.
"It's the prerogative of the lead actor, since the show can't start without the star," I joke.
"Well, now we have all our players in place," Ruth says as he adds the last of 3 cups (275g) of oatmeal. "Time to get the show on the road, isn't it?" 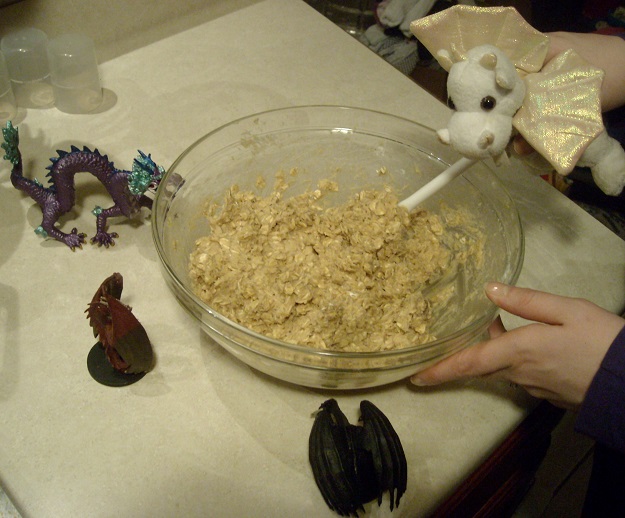 One last session of mixing presents us with this nice cookie dough. Yum! This part is ready to go, but needs a place to go! 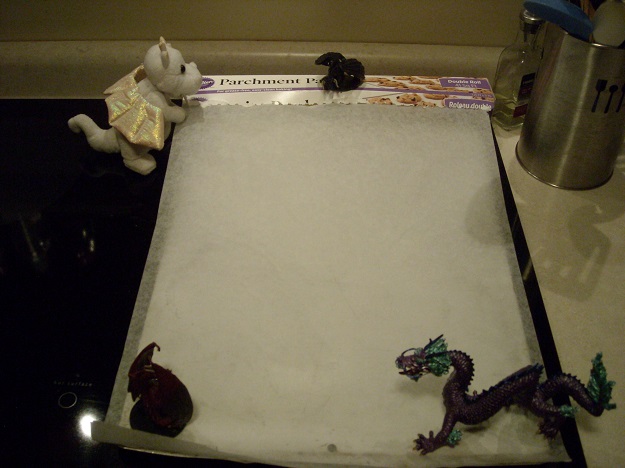 Everyone pitches in to roll parchment paper out onto the cookie sheet. This is the fastest and easiest way to prep a baking sheet, but greasing it works as well. The cookies will slide off the parchment quite nicely, though, so it's my first choice. 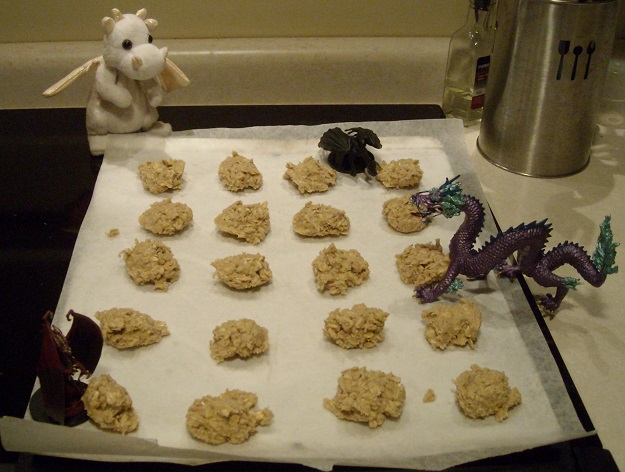 Pull out a couple of spoons and use them to plonk balls of dough about 1 to 1 1/2 inches (2-3cm) in diameter onto the tray, making sure to leave 1 1/2 to 2 inches (3-4cm) between them, as these cookies will flatten out a little and you don't really want to run them all together. It's a touch harder to share them if you have to cut them apart first. Uh, the littlest ones seem to have misunderstood slightly. These aren't shaped cookies... 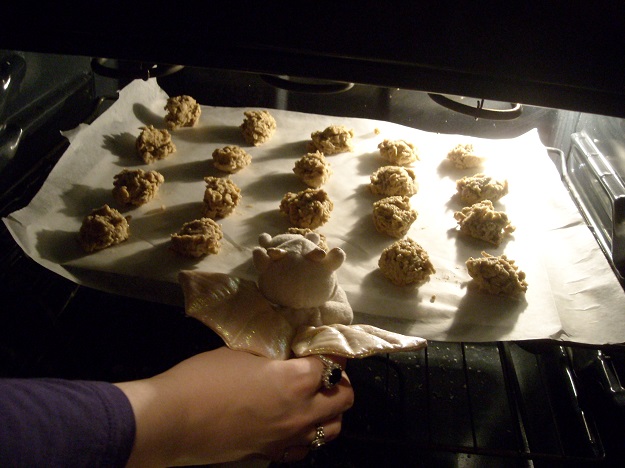 Ruth slides the sheet of cookies into the oven to bake. 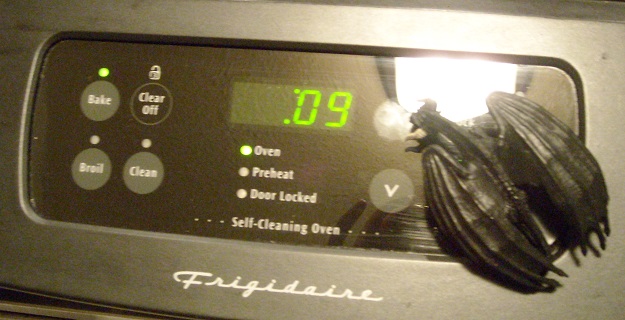 Black sets the timer for 9 minutes, to be on the safe side. The recipe calls for 9 to 11 minutes, but ours ended up taking more like 12 or 13. 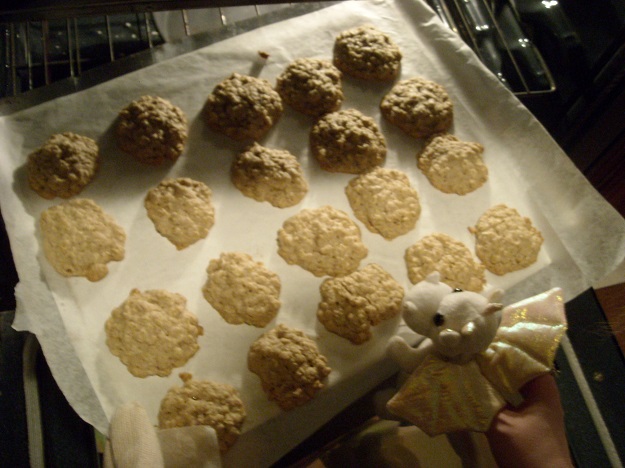 Ruth pulls the first sheet of cookies out of the oven! "Mm, these look quite tasty," he says. "I am looking forward to trying them!"
"They're quite good," I tell him, "and they got rave reviews from Archi's coworkers the last time I made them." 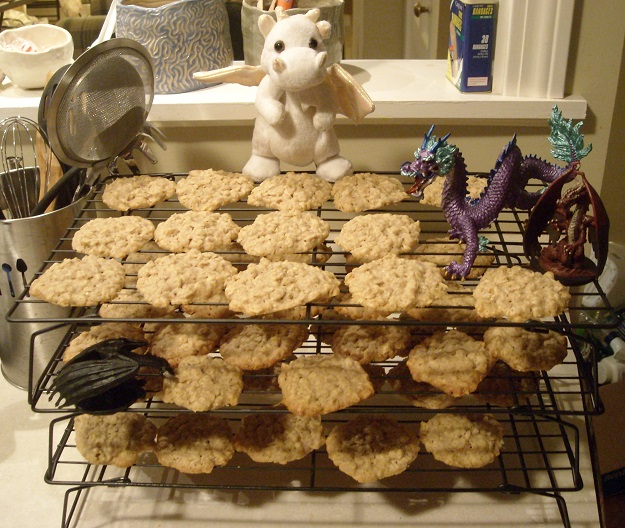 We carefully piled the cookies onto the cooling rack. Hi-chan and the littles are trying to sneak bites, while Ruth points out that they'll taste even better accompanied by a glass of milk or tea... but no one seems interested in getting a drink. Yummy cookies!!
Posted by Unknown at 4:00 PM