Today's recipe is Bubbly Pie! A favorite at Gathers on Pern, though I've modified the shape slightly because I don't really have the right equipment to craft the normal tarts or Gather-pies. The recipe is pulled from The Dragonlover's Guide to Pern. 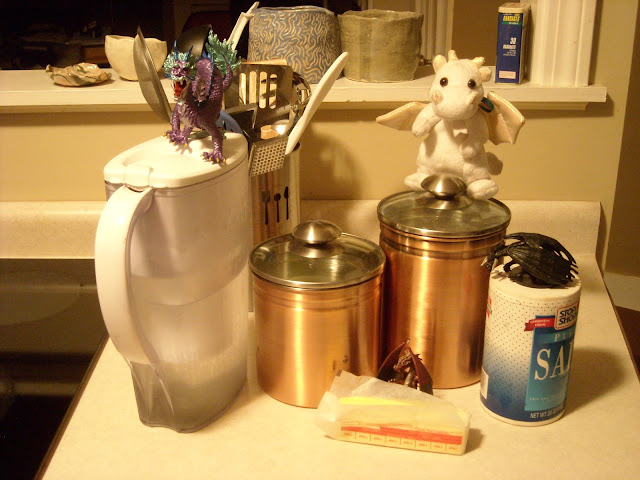 First, we get the ingredients together. For the crust, we need flour (Ruth is sitting on it), sugar (the smaller canister), water, salt, and butter. 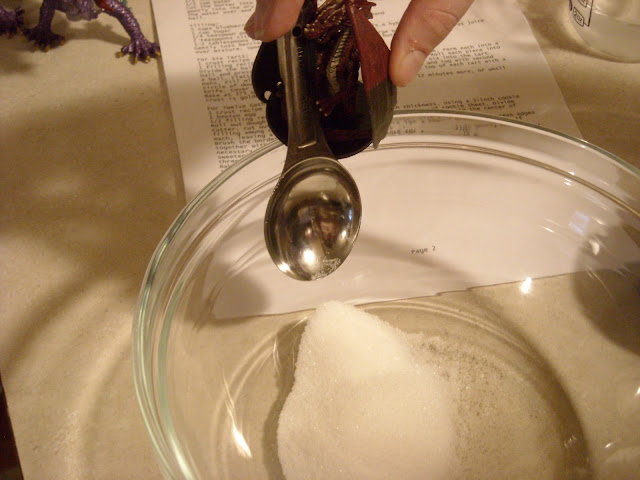 We need 2 tablespoons (25 g) of sugar. Red handles adding that to the bowl. 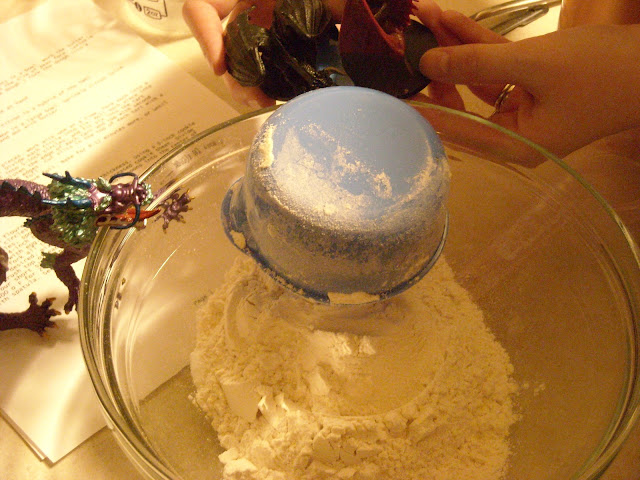 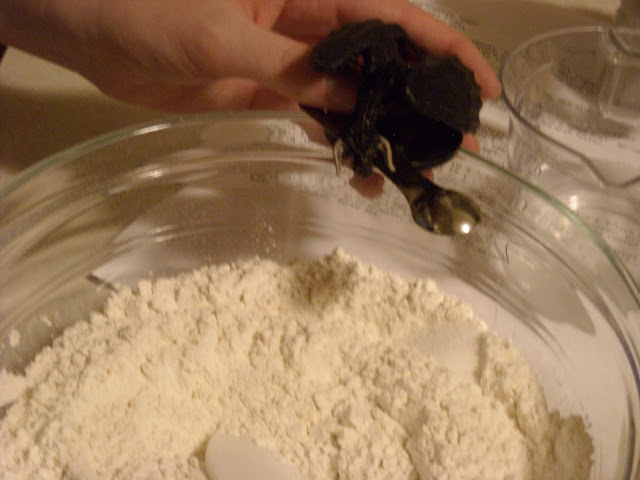 Black adds 1/2  teaspoon of salt on his own. 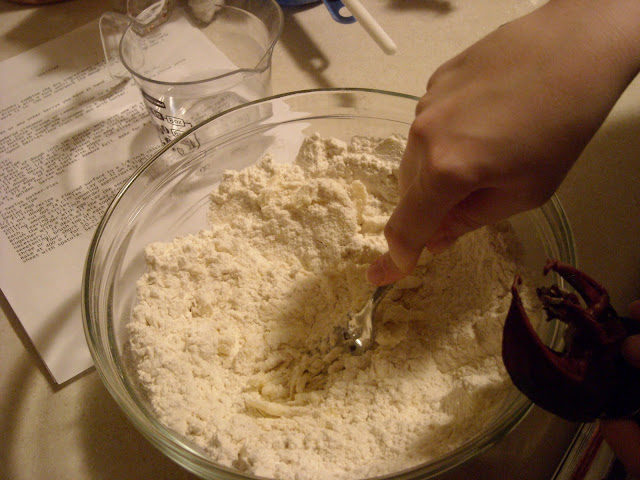 Now we need to mush in a stick of butter (1/2 cup, 120g) with a fork. Red is watching me handle this--the particular direction and level of pressure required make it too difficult for the dragons. 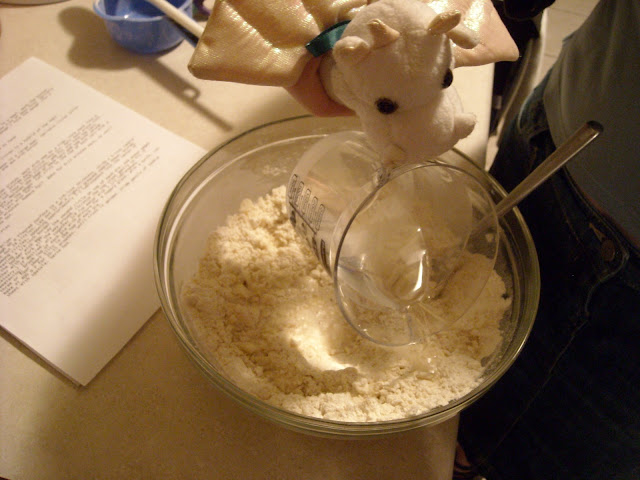 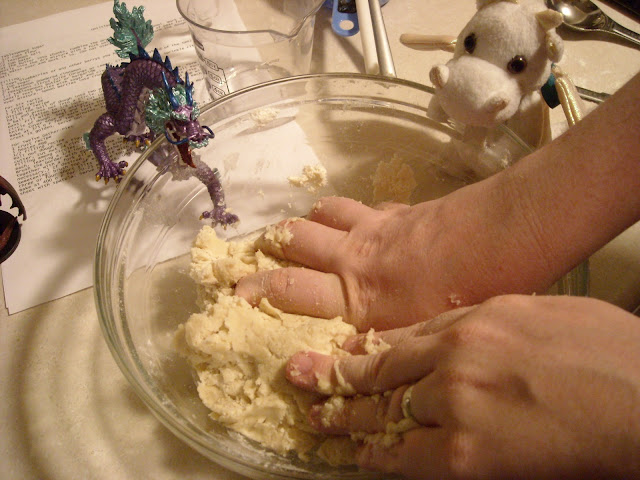 Now it's time to mix everything together really well. My husband Archi steps in for this because the dragons' hands are too small and my shoulder is acting up again. 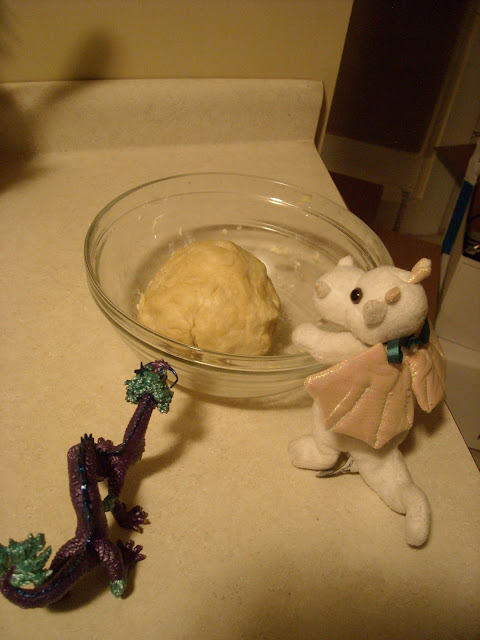 The crust is completed now, so Ruth and Hi-chan set it aside so we can start on the filling. 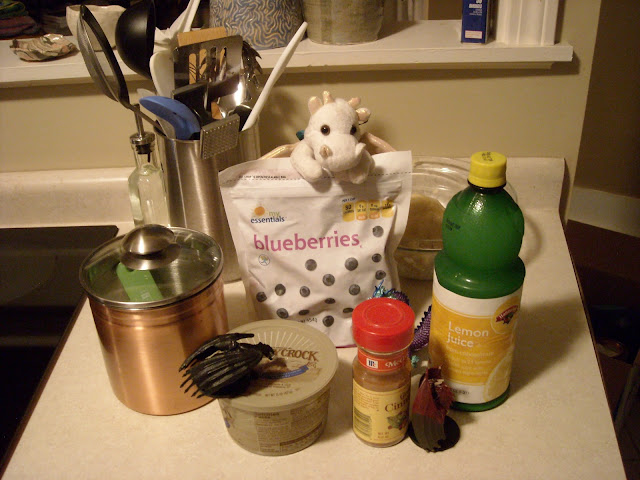 Here's what we need for the filling! Hi-chan brought the lemon juice, but Red shoved the cinnamon in front of her face. She didn't notice until after the picture was taken. Ruth brought the blueberries. That copper canister is the sugar. Black is apparently entranced by the writing on the tub of margarine. 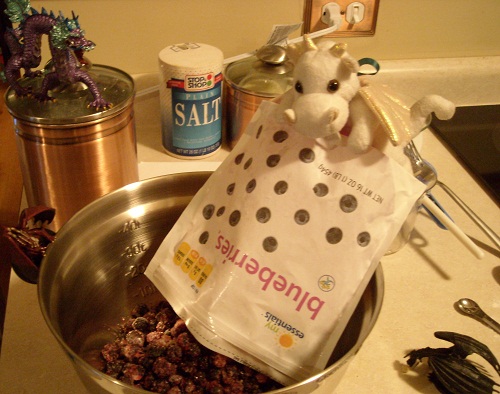 First we add the blueberries to the bowl. Ruth is having fun pouring them! Black got distracted by a stray bit of crust-dough. If you're using fresh blueberries you need about 5 cups (750 g). Since these are frozen, one bag (1 lb, 454 g) will do it. 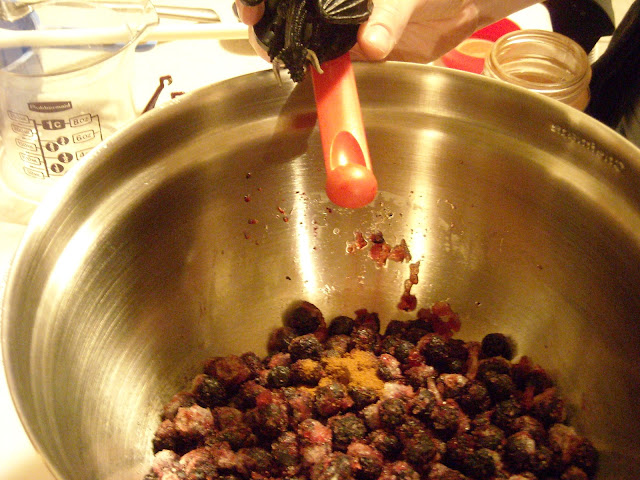 I got Black's attention back by asking about the 1/4 teaspoon cinnamon. He was happy to add it. 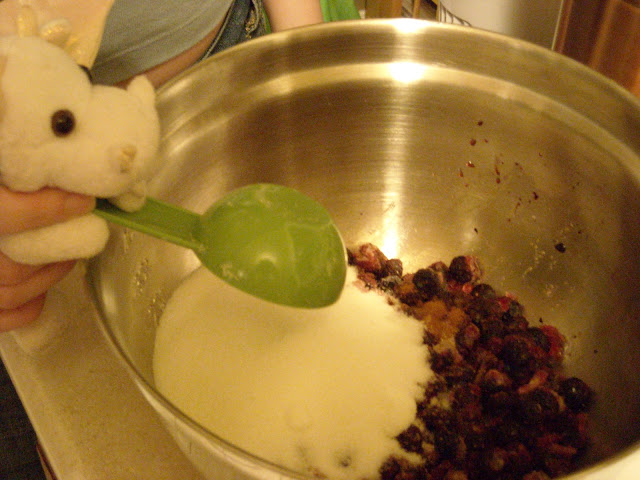 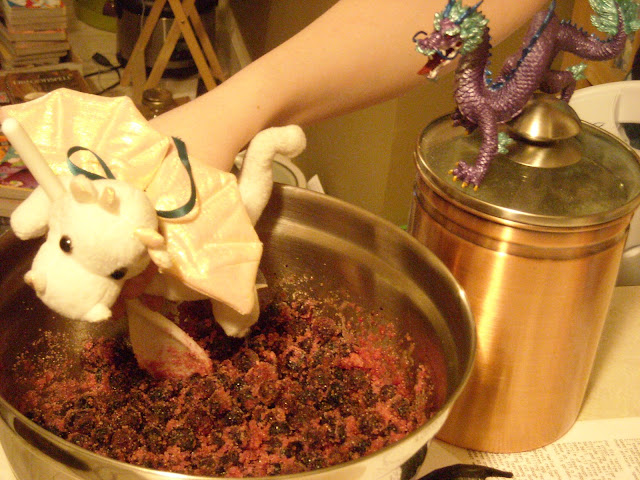 Now to mix it all together! Ruth is good at stirring. Hi-chan is laughing from her perch on the flour canister  You can just see Black's wing in the bottom there--he's re-reading the recipe again. 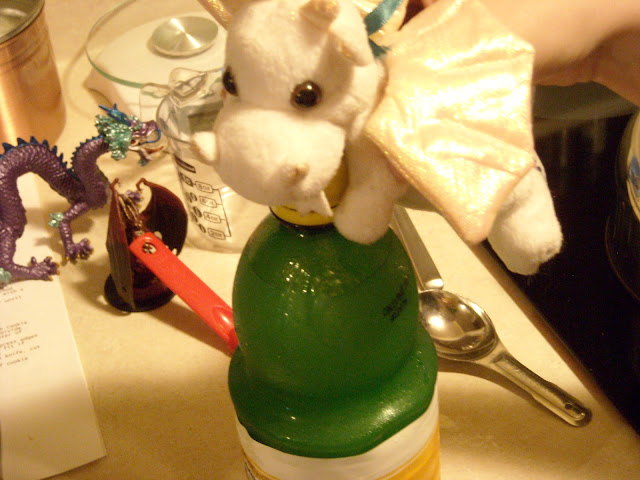 This is actually an in-between step. Ruth's working on getting the lemon juice open while Hi-chan and Red are cleaning up in the background. 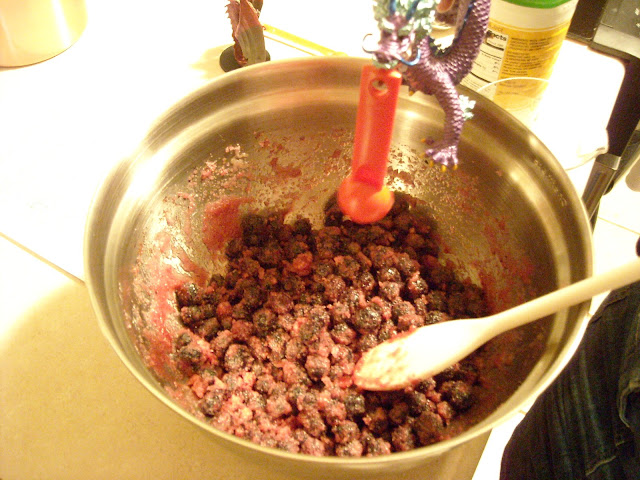 Hi-chan volunteered to actually add the 2 teaspoons (10 mL) lemon juice once Ruth got it open. Since she hadn't added anything yet, I made him let her have a turn.

That's the last step for the filling until we add it to the pie. Ruth opted to sit out of the next portion, as he's not too keen on mess. 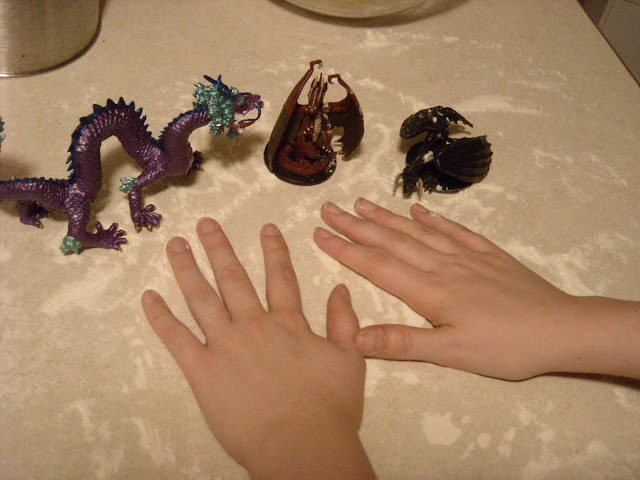 We need a floured surface to roll out the crust on! Spreading the flour is fun, but definitely messy! I'm lucky I didn't get it all over my shirt! I took my rings off so they wouldn't get flour or dough caught in them. 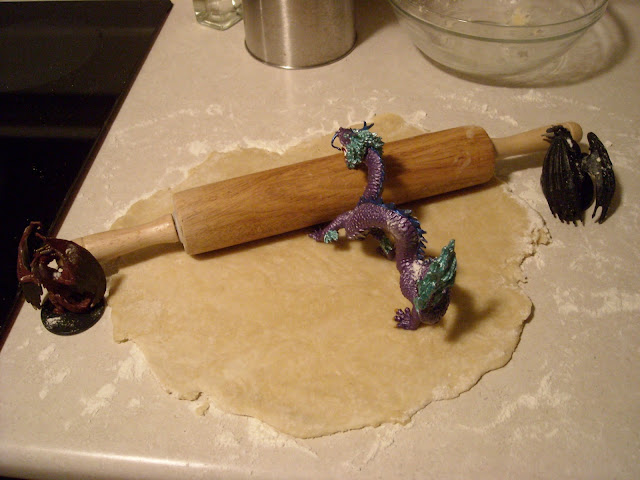 Now that the surface is floured, we roll out the dough! Hi-chan and the smallest two are having a blast with the rolling-pin. 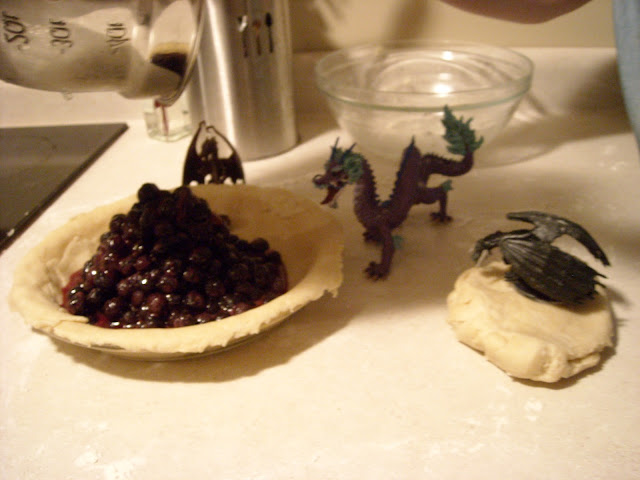 I put the bottom crust into a pie plate for them, and they lined up to watch as I poured the filling into it. Looking tasty! This is about the point where I started to deviate from the recipe as it's given. The directions tell you to section the crust dough into smaller pieces, either six  for use in either small tart pans (which I don't have) or a couple dozen 3-inch (7-8cm) circles for 'gather pies'. (Hand-held pie-pockets similar in size to the ones you get at McDonald's.) I don't have any cookie cutters, so I decided I'd do one bigger pie. 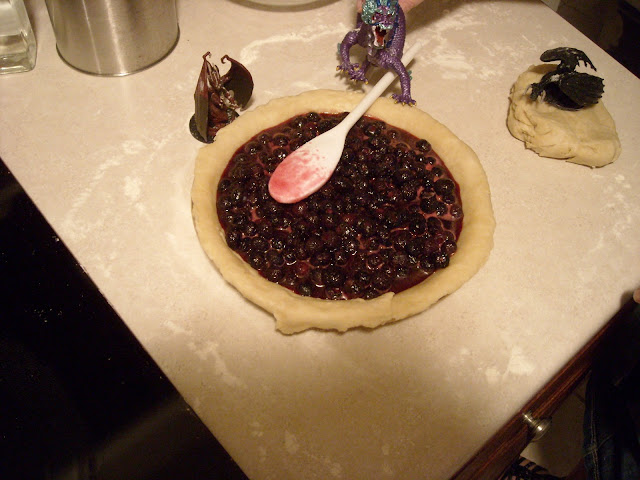 Hi-chan spreads the filling out evenly, so that there isn't a pile of it in the middle. Red is thinking of stealing a bite of filling before it gets baked, and Black is trying to decide how much of the dough remaining for the top crust he can eat without getting caught. 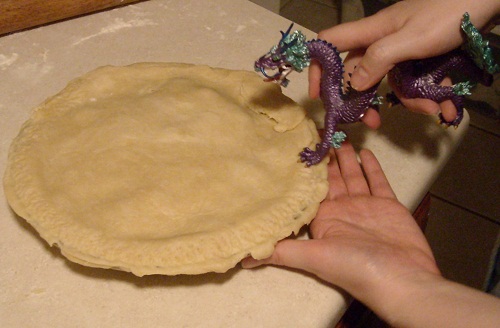 Hi-chan's paw makes a much more interesting sealing-pattern than a fork. She really likes working with dough. 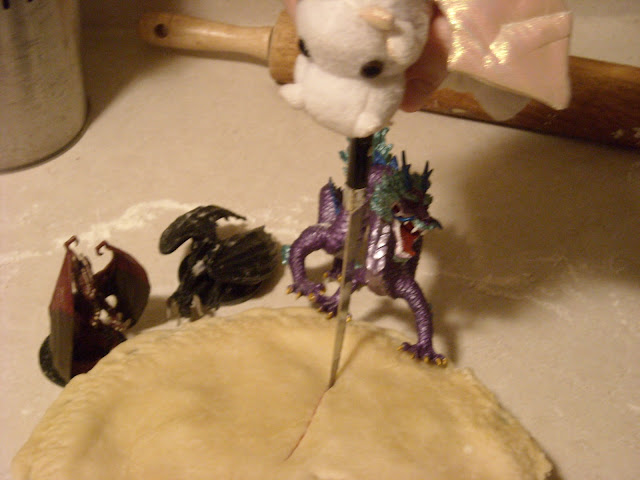 Ruth gets to cut the steam-escape holes in the top crust, while the others watch make sure he's doing it correctly. 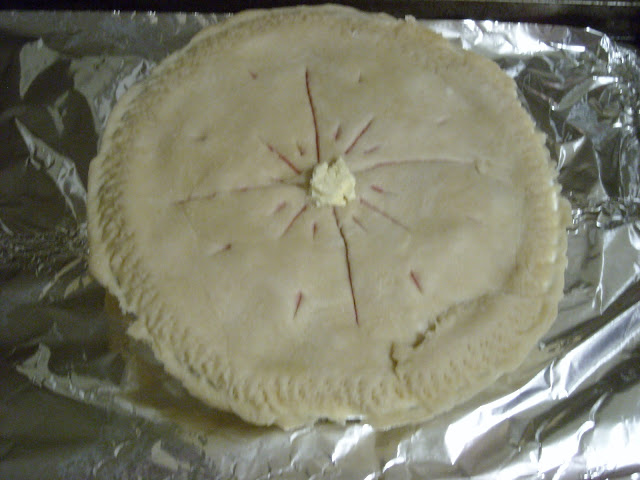 Here's the completed pie, just about ready to go in the oven. That's a pat of butter in the middle, because I forgot to put it on top of the filling before I put the top crust on, and didn't remember until after Ruth had cut the steam-holes. 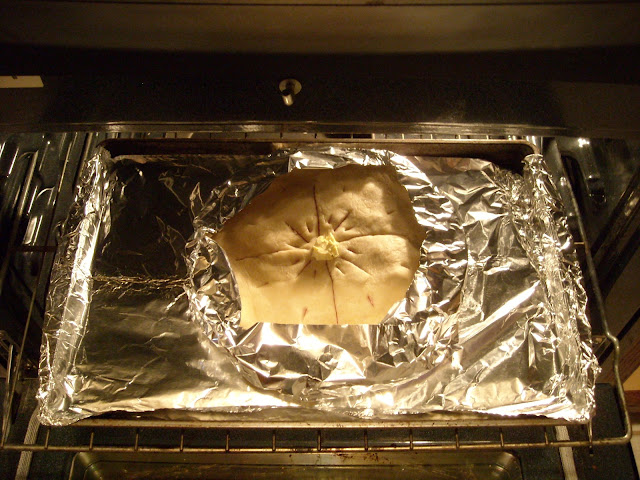 For the first part of baking, wrap the edges of the pie crust in aluminum foil to keep them from cooking too fast. I think pie-shields will do that trick, but I don't have any so I use foil. Not the prettiest solution, but functional.


While the dragons get their shower and then dry off, I get the rest of the kitchen cleaned up. Dishes go in the dishwasher, and the counters get swept down (remember all the flour?) and sprayed with white vinegar and wiped with a paper towel to clean them. Not that clean-up is really all that interesting. 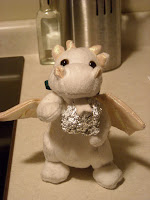 Pulled the pie out to take the crust-covers off. Ruth balled them up for me, so they'll take up less space in the trash can.

The directions say it doesn't take long for the pie to cook, but I forgot that the directions are for several smaller pies, not one big pie. I kept having to put it back in the oven again.
Tarts want a 375°F (190°C) oven for 10 minutes with foil and then 8-12 minutes without. Gather-pies don't need foil at all, and want a 400°F (205°C) oven for 20-25 minutes. Both say to bake until the crust turns golden-brown and serve hot. 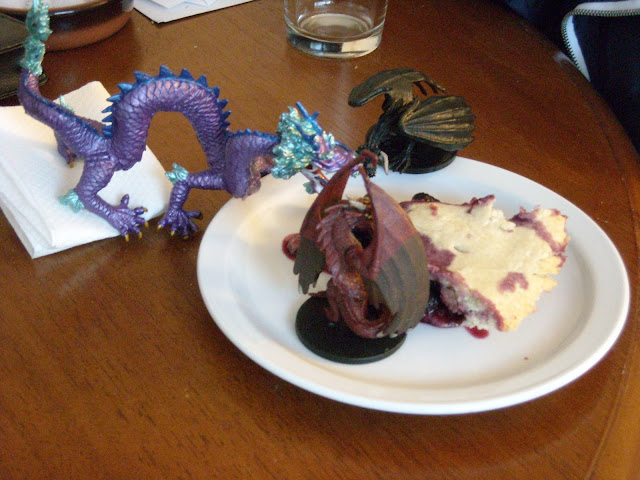 And here we have finished bubbly pie! Dig in, everybody! 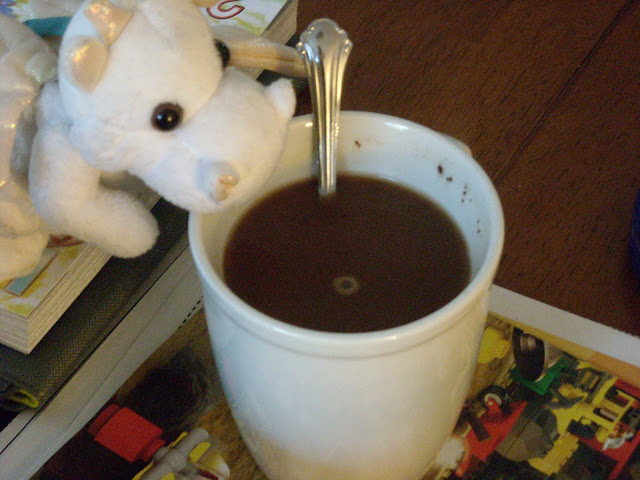