Today's recipe is Chocolate Puddle Cookies!
This recipe comes to us via the 'Goons With Spoons' section of the Something Awful forums. (Archi thought it looked tasty, and the dragons agreed! They like chocolate.)
It wasn't until we actually started collecting the ingredients that I realized this recipe doesn't call for flour--these are gluten-free cookies! They're certainly loaded with sugar and chocolate, though! 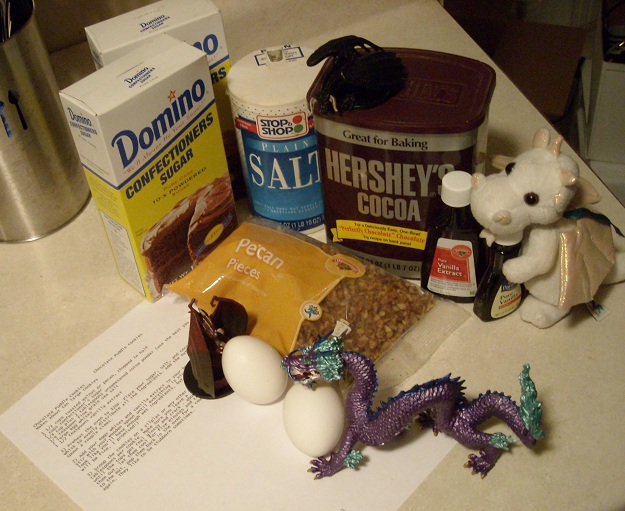 We do need powdered (confectioners) sugar, which seems to substitute for the flour. There are two boxes because one was almost empty. Salt is a staple in most baking recipes, and we do need a little for these puddle cookies. Black has decided that the cocoa makes a good vantage point. Red brought in the pecans (you can use any kind of nut, but you do need them or the cookies won't hold together) and then caught one of the eggs. Hi-chan was having a blast rolling them around. I'll be separating them later, as we only need the whites. Ruth has the vanilla, which is the only other wet ingredient. Again, two bottles because one was almost empty. And here's all the various equipment. A nice big bowl, a spoon to stir with, a cookie sheet and some parchment paper. Ruth likes the whisk. Black brought one measuring spoon, while Red is somehow managing to carry the other two. Then again, Hi-chan looks a little precarious with those measuring cups. 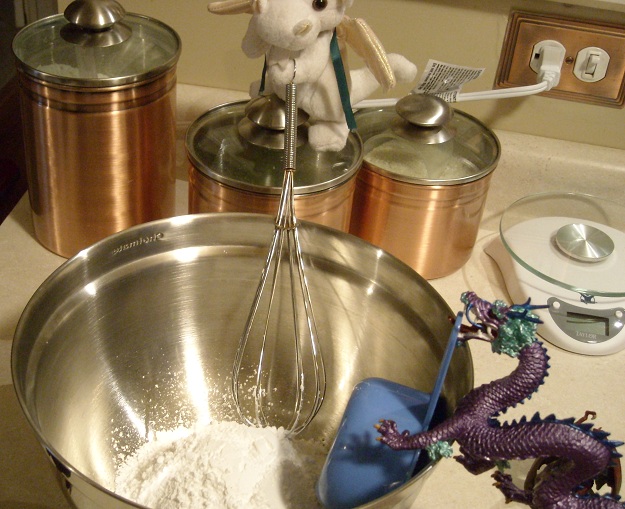 So let's get started! Ruth refused to relinquish the whisk, so he's waiting for it to be time to stir. Hi-chan managed to get the powdered sugar--2 cups (200 g)--into the bowl without getting it everywhere else too. 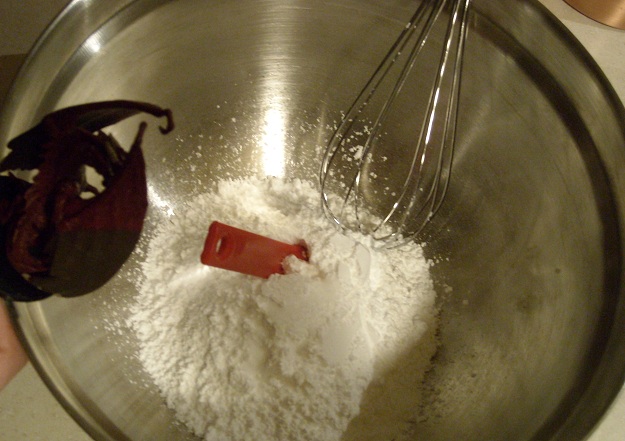 "I dropped the spoon!" Red sounded upset. He calmed down after I rescued it for him. 1/4 teaspoon salt added with only a slight mishap. 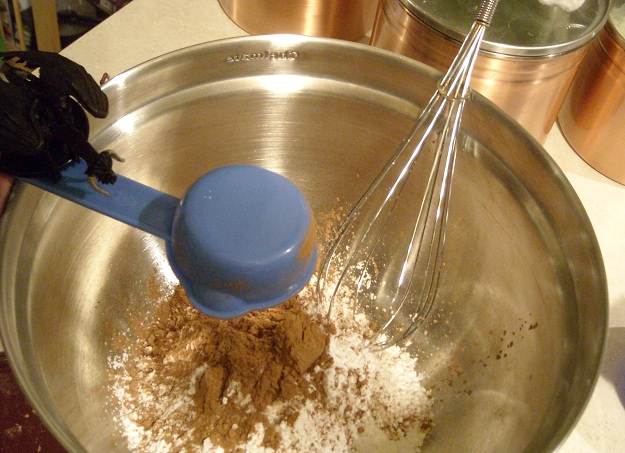 Black added the cocoa powder he'd been so interested in. 1/4 cup plus 2 tablespoons (42 g). Make sure you're using unsweetened cocoa powder--there's plenty of sugar in this already! 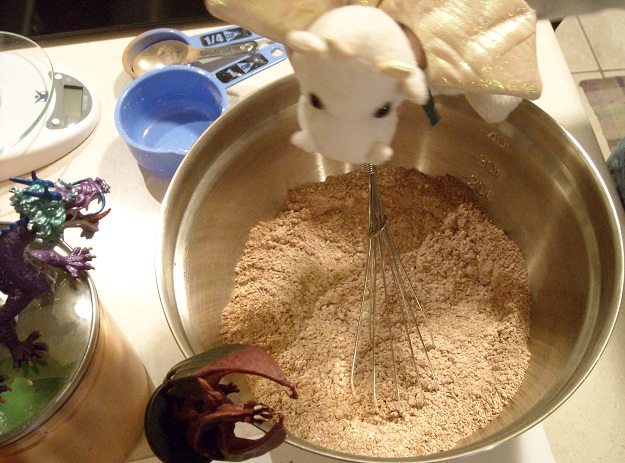 And now it's Ruth's turn, finally! Mix it all together. This is what it looks like when it's all mixed correctly. It should be the same colour throughout the mix--no blotchy! 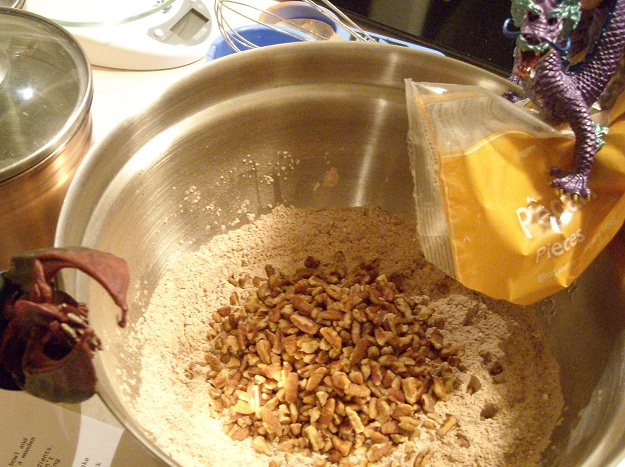 Hi-chan is having a blast adding the nuts. Red seems to be having plenty of fun just watching. The recipe asks for 1 1/2 cups (225 g) of toasted walnut or pecan, chopped in half. I used about a cup (150 g) of pecan pieces and it came out fine. I wanted to save enough to make an extra batch, since this recipe only makes about 10 cookies, and I was planning to share them with my 8-member gaming group. 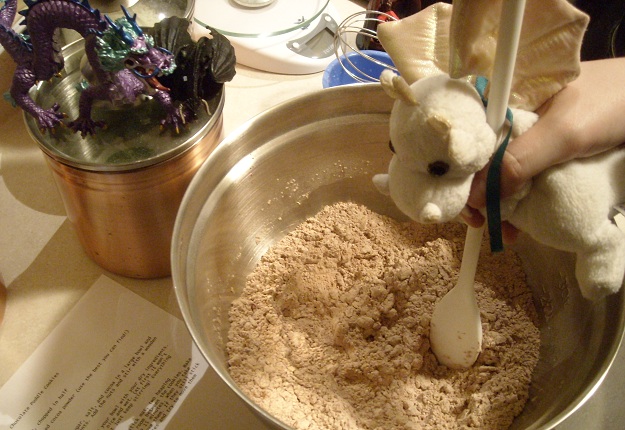 Ruth mixes the nuts in as Black and Hi-chan argue over the coveted canister perch. 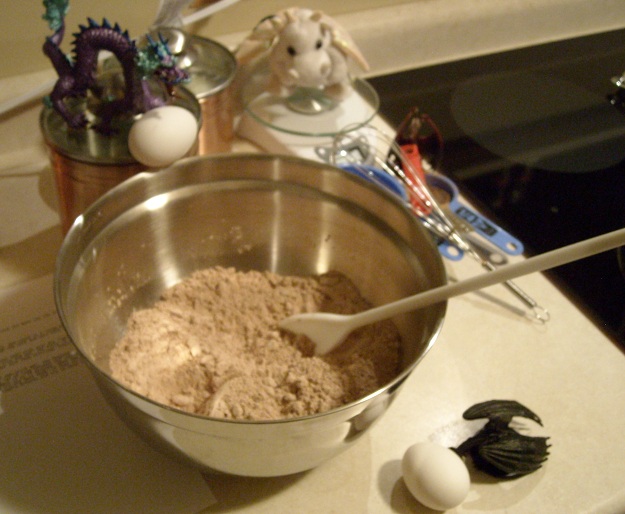 Well, the stopped arguing long enough to get the eggs we'll need next. Red is working on cleanup, and I think Ruth is goofing off. We need 2 egg whites and no yolks. 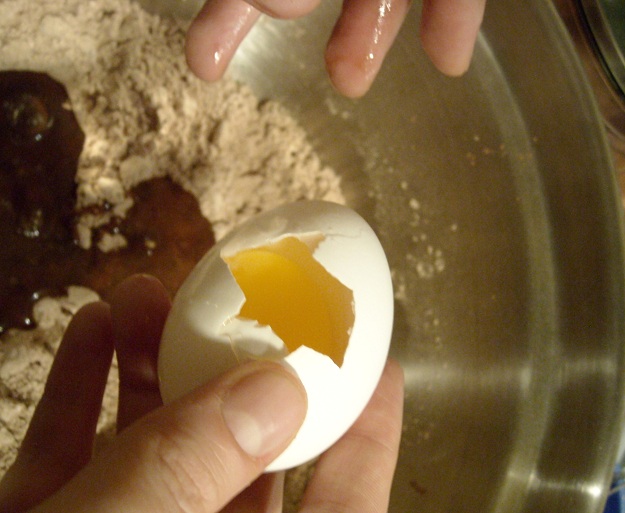 Separating eggs is a lot easier when they don't do this. The first one broke nice and clean into two little cups, so separating it was a breeze--until I broke the yolk. Fortunately I caught it in time to prevent any yolk from actually getting into the bowl. This one was just a mess, though the yolk remained intact, and I did eventually get the white into the bowl. 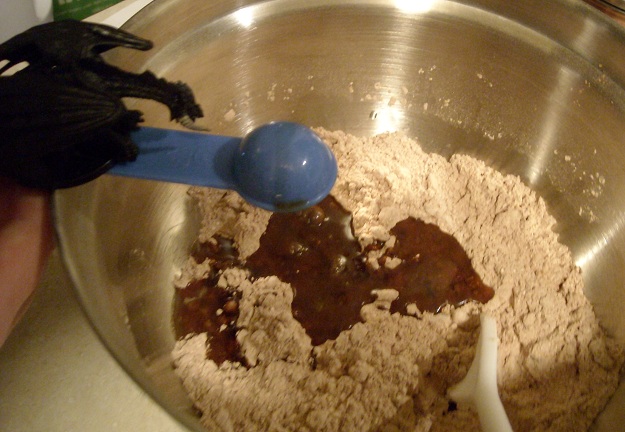 Seems they've settled the question of the canister. Black is happily adding 1/2 tablespoon (12.5 mL) of vanilla extract. (For some reason the recipe lists this as 1 1/2 teaspoons, but it's the same measurement.) 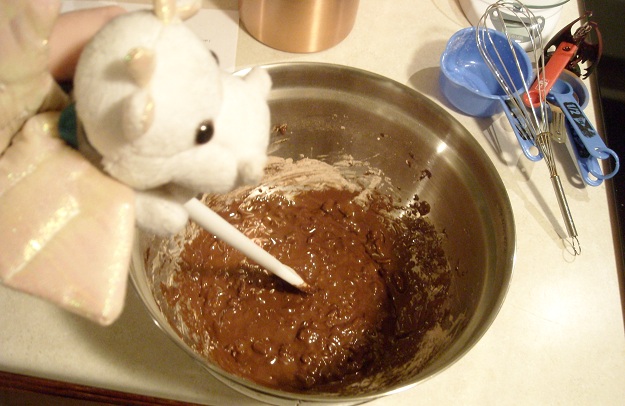 Ruth is back in action again, stirring it all up! Since there isn't much liquid in this recipe, and no flour, the dough is really thick and sticky. Make sure to hold the bowl in place while you're stirring, or it will dance all over your counter and nothing will get mixed. There is enough liquid to blend everything, but only just, and it really won't look like enough when you first start mixing! Just keep going. 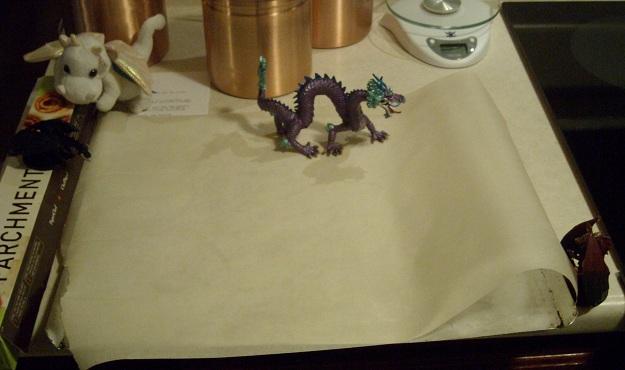 The recipe wants you to bake the cookies on a 'silplat or other non-stick mat'. I don't have anything like that, but a plain cookie sheet covered in parchment paper will make a fine substitute. You should be able to find parchment paper in your local grocery store (the baking aisle) for less than $5 a roll. Paper in the oven is perfectly safe as long as you're not cooking above about 425°F (about 220°C). Paper does ignite at about 451°F (232°C)--thus the title of the book by Ray Bradbury--so if you want to bake hotter than that, use something else. Each cookie should use about two tablespoons of batter, dropped like so onto the sheet. Make sure to leave some space between cookie-drops, as they'll expand during baking. Of course, the dragons are far more interested in the piles of chocolate than they are in me dropping them. The level of coordination required to do this with the spoons is unrealistic when you can't wield both spoons on your own. 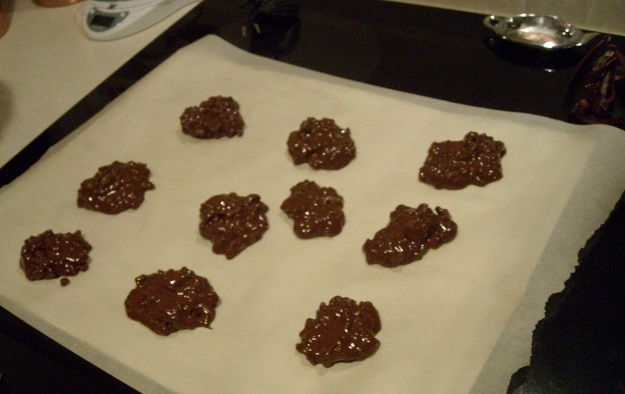 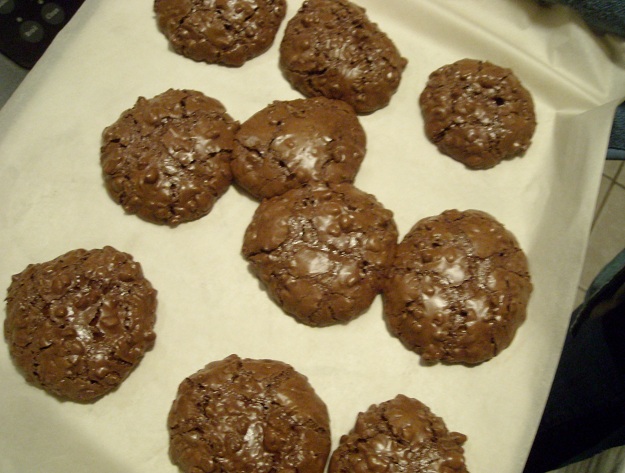 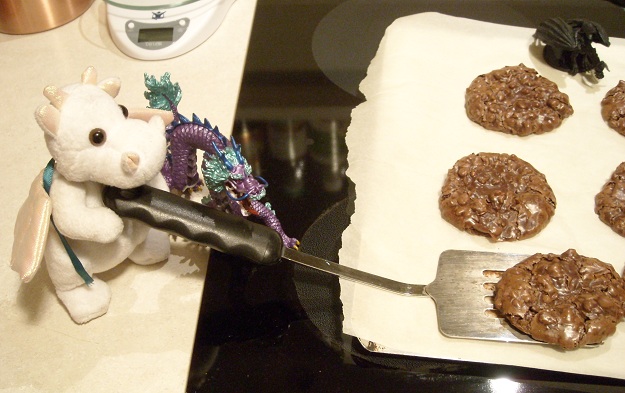 Now that they're cool, Ruth has grabbed the spatula to move them off to a plate! Hi-chan is ready to assist--though I'm not sure if she's more eager to help move them or to sink her teeth into one. 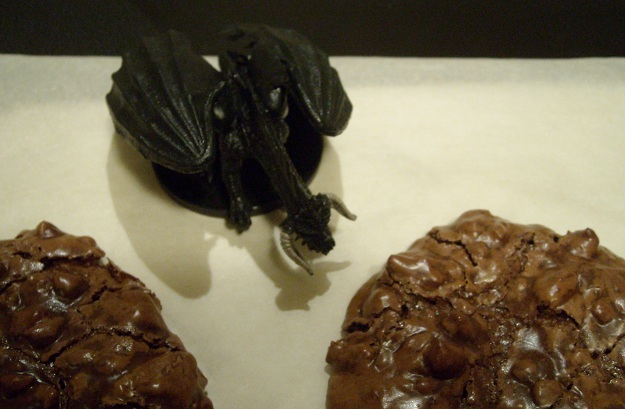 Black is trying to decide how many he can eat without getting caught. 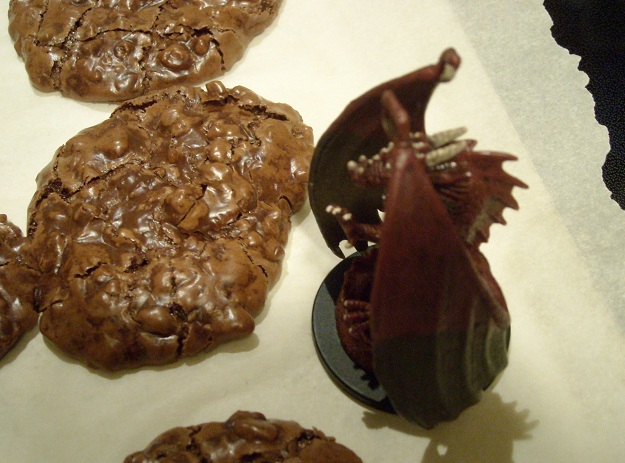 Red is counting to make sure all the cookies are there. 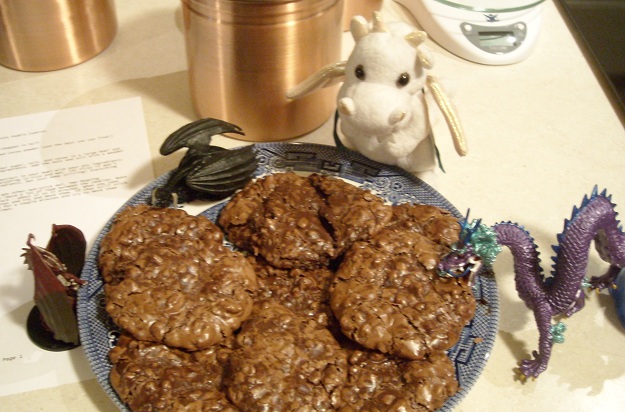 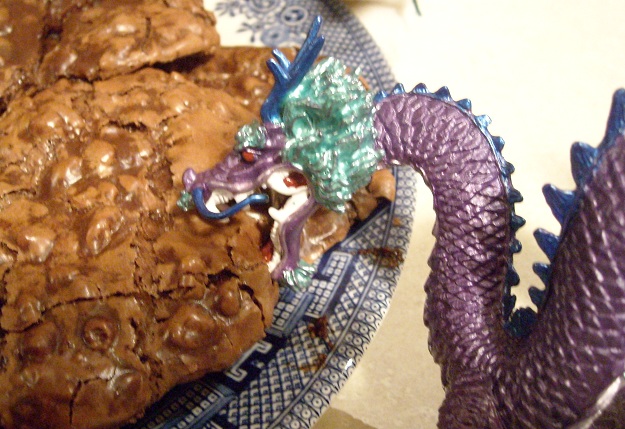