In which we finally get to actually eat pie!

Welcome back, everyone! Sorry for splitting this recipe, but I really wanted to use all these pictures without overwhelming anyone. Red and Black were very excited and kept doing cute things that just begged to be included!

Today's recipe is Apple Pie! I wish I could tell you where I got the recipe from, but I'm going from a page photocopied out of one of my mother's recipe books, and I have no idea which book! I guess the simplest explanation is that today's recipe comes from my Mom; it's the one she always used for apple pie when my brothers and I were little. (None of us are little anymore, I'm the only one left that's shorter than Mom!) Mom always used frozen pie crust, though, to save on time and effort and digging out a pie pan. Hi-chan, on the other hand, loves rolling out dough.

Let's get started! Well, pick up where we left off, at least. 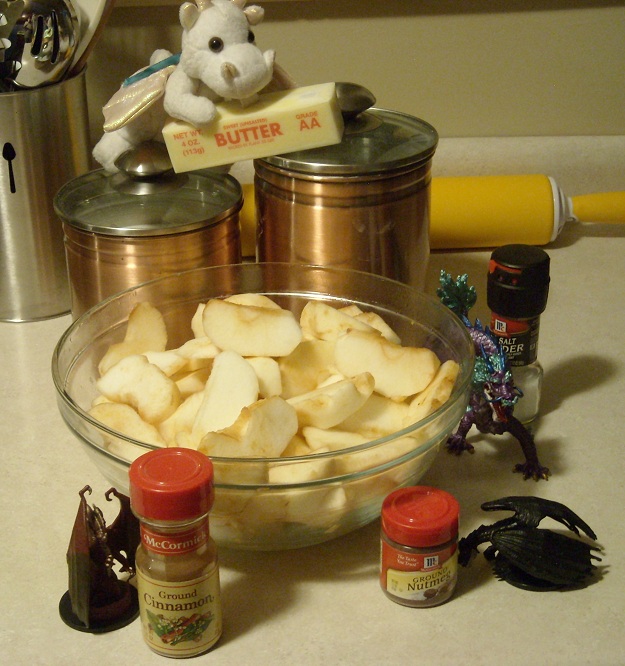 Here we have everything we need to make the pie filling! Red has the cinnamon, and Black brought nutmeg. Hi-chan is squeezing herself between the cut-up apples and the salt. Ruth brought butter and landed on the canister of sugar. The taller canister next to him is flour. I really ought to find the rolling-pin a better home.

And here is equipment! Red brought the measuring spoon, as usual. Hi-chan brought the pie plate (we have a 9in/23cm deep dish) and a knife for cutting the top slits. Black has balanced the cup measure on the edge and is trying to see his reflection in the glass of the pie plate. Ruth brought out a nice glass bowl for mixing in--everyone has decided that we prefer the glass bowls because you can see everything in them, which is especially beneficial when you're not tall enough to see over the rim easily. 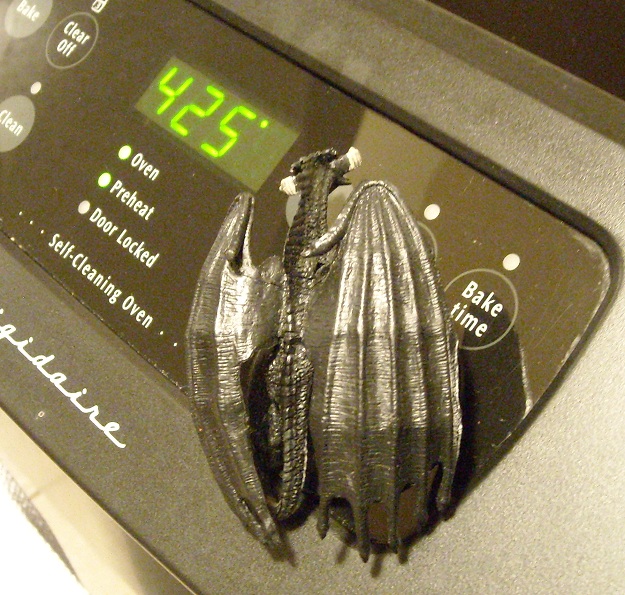 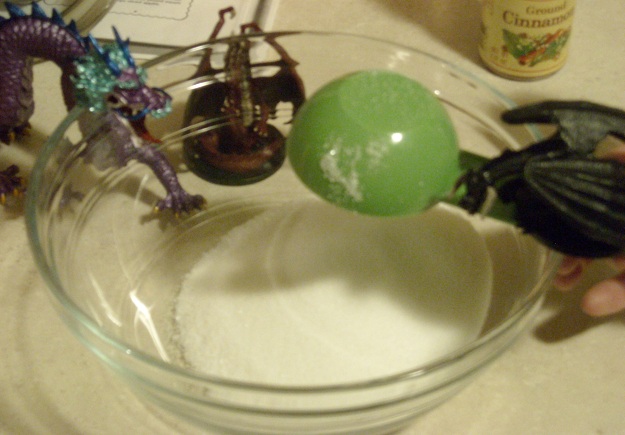 Black jumped up to get the sugar, too. Red is enjoying being able to watch through the side of the bowl as 3/4c (175g) sugar is added. Hi-chan poked her head over the side just because she can. 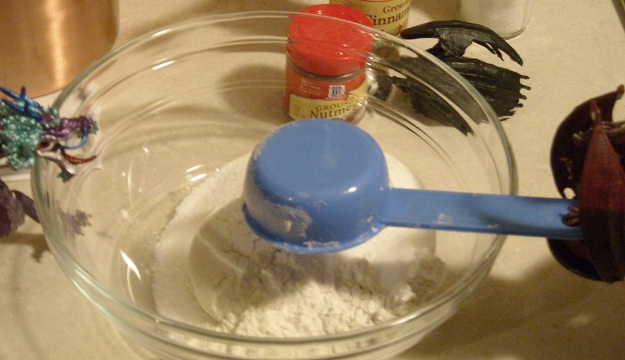 Red's turn now, adding 1/4c (36g) flour. Black is more interested in getting the nutmeg to add next. 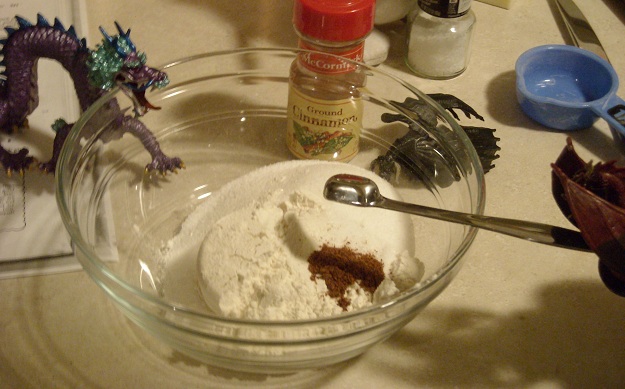 Red measures out 1/2 teaspoon of nutmeg to add, as he likes the spoon and Black has gotten distracted observing the ingredients already in the bowl. 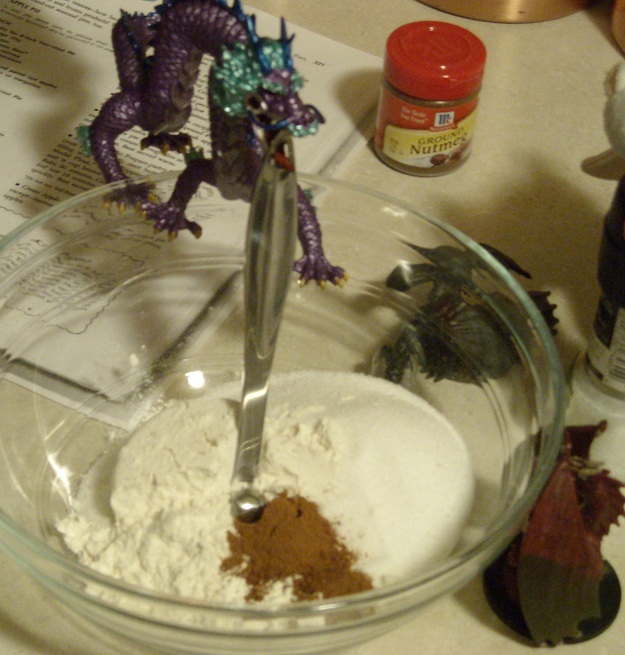 Hi-chan's turn now! After adding the 1/2 teaspoon of cinnamon, she decided that the measuring spoon would work just fine for mixing, too, and dropped the end of it into the mix. Red is annoyed with her for that. 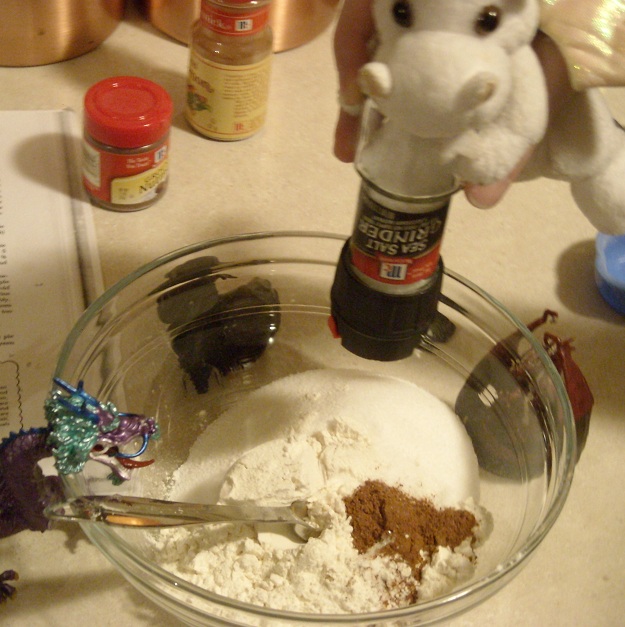 Hi-chan is ignoring Red's pouting and left the spoon in the mix while everyone watches Ruth add a dash of salt. 'Dash' isn't an exact measurement, something less than 1/8 teaspoon. Ruth is adding a shake or two from the salt shaker that normally lives on the table. Do not bring out the big salt canister for this, it's not worth it. 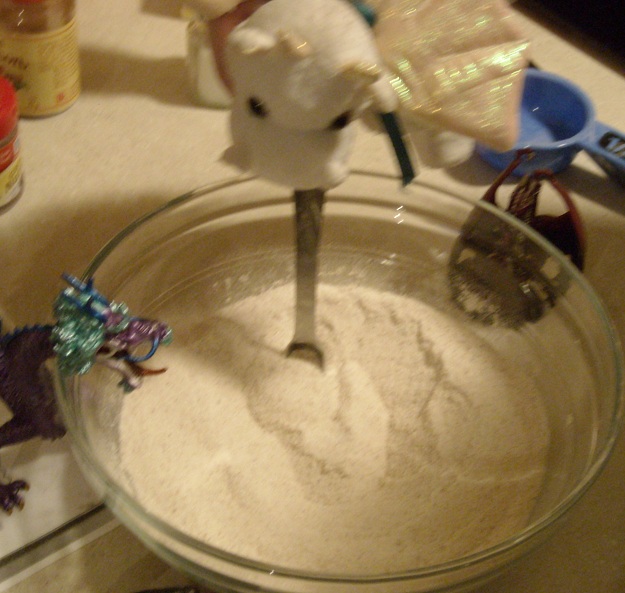 Red is still pouting, but Ruth decided that Hi-chan was right and the measuring spoon should work well enough for stirring our spice mix. Saves on how many spoons get washed. This is what the mix should look like once it's been all stirred together--nice and uniform, with no blotchy patches. 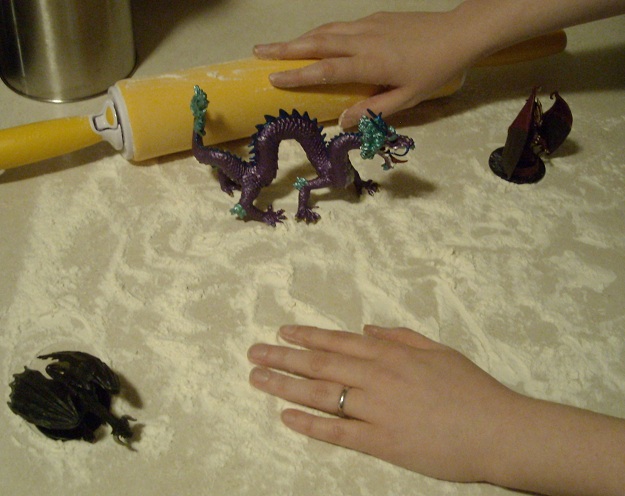 With our filling mostly complete, I coax Hi-chan and the smaller two over to the other side of the oven to spread flour on the counter so we can roll out the dough for the bottom pie crust. We'll need somewhere to put the filling once Ruth has it all mixed together! In the background, I'm putting flour on the rolling-pin so the dough doesn't stick to it. 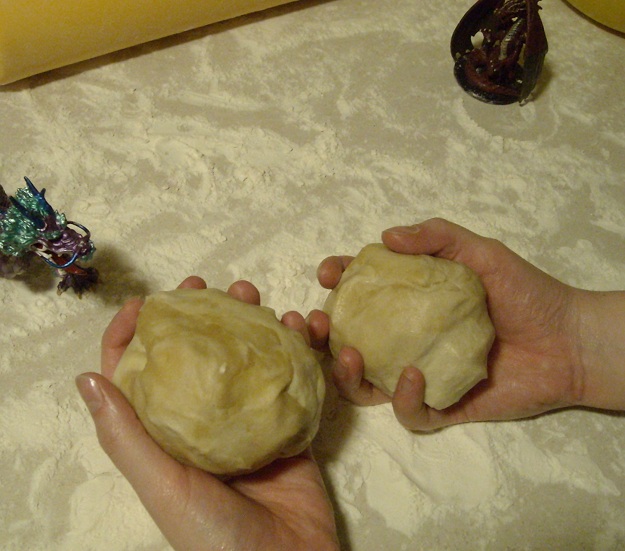 Now we pull the dough we made yesterday out of the fridge and play with it a little until it's a comfortable temperature. (Either my fridge is set a little too cool or I just have no tolerance for cold...) This will make both crusts, so we need to separate it into two balls, one slightly larger, as I've shown in the picture. The larger ball will make our bottom crust, while the smaller will become the top crust. 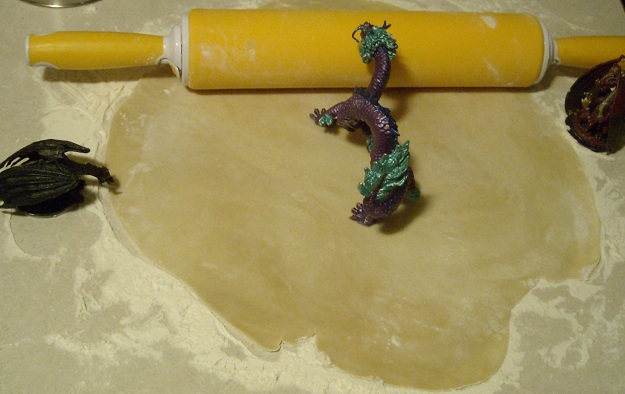 Hi-chan loves playing with the rolling-pin! Red and Black are monitoring the size of the rolled-out crust--or at least, that's what they're supposed to be doing. Looks like Black is trying to figure out if he can sneak a bite.
Roll from the center out to an edge, changing which direction you're moving with each pass of the rolling-pin. You want the crust to be about two inches (5cm) or so larger than the rim of your pie pan--remember that it has to cover the bottom and the sides! It should end up about 1/8 inch (3-4mm) thick. I forgot to measure how thin ours got. 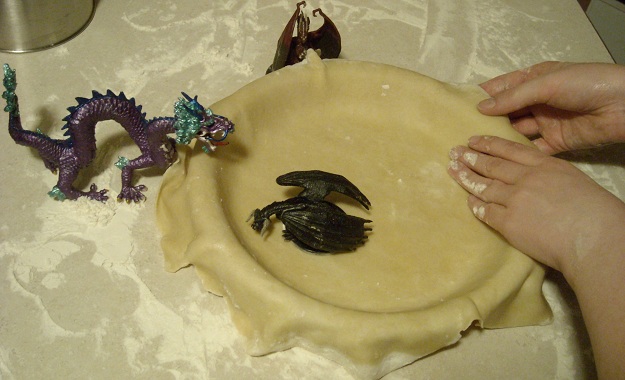 Now we drop the freshly rolled dough into the pie pan! Move it carefully so that it doesn't tear. Everyone is pitching in to spread the crust evenly through the pan, making sure it's tucked into the corners. Having extra draping over the sides is normal, we'll take care of it later. 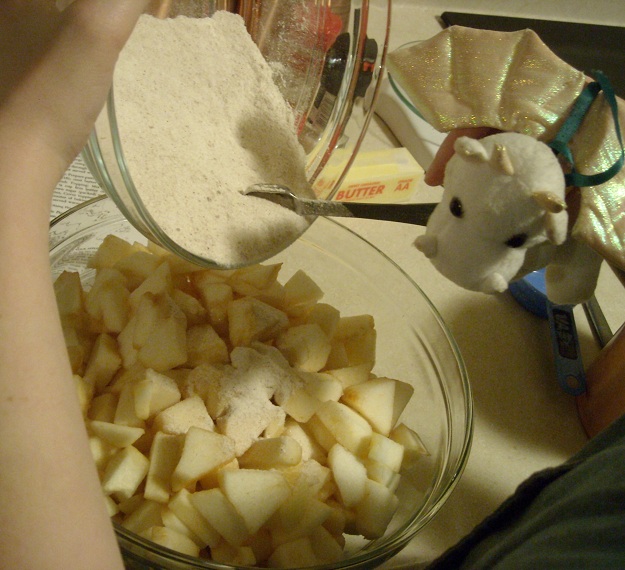 While the others are rolling out dough, Ruth adds the sugar-and-spice mixture to the apples. I'm not sure exactly how much chopped apple we ended up with, volume-wise, but the scale said we have 1.15kg of apple bits. The recipe asks for 6 cups for this size pie, so we probably have more than it actually wants. 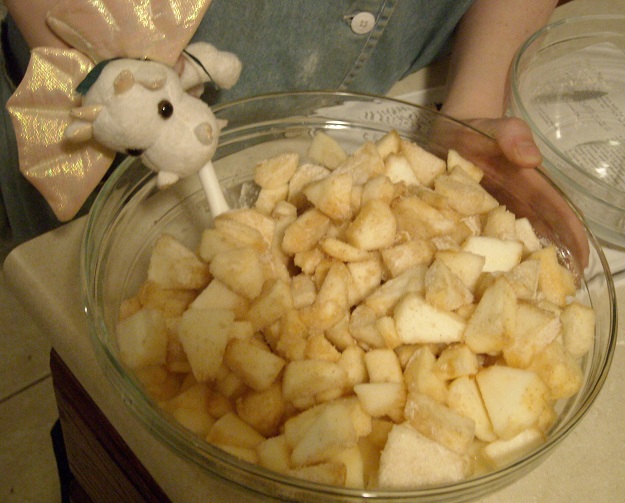 Ruth mixes the apples and spice mix together, making sure all the apple bits are coated with sugar-and-spice to the best of his ability. Don't worry too much about missed bits, baking will even it out as long as you start with something fairly well mixed. 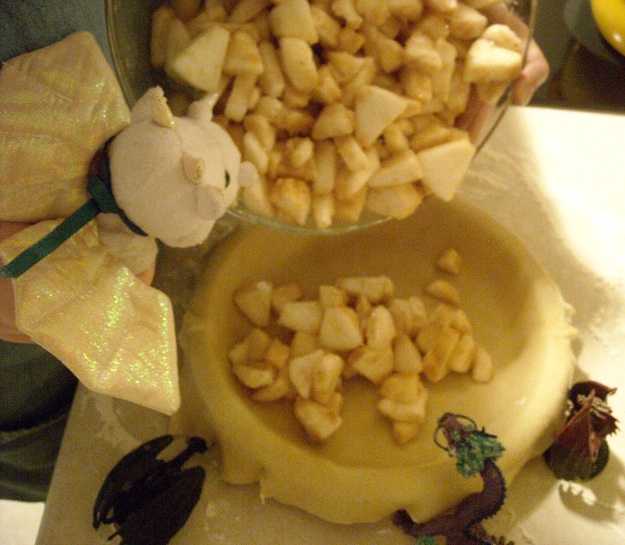 Everything is all set, so now Ruth pours the pie filling into the prepared shell. I'm holding the bowl for him. The others are holding the pie pan in place--though I still think Black is trying to steal a bite of raw pie crust...

Some of the apple bits didn't quite manage to stay in the pie shell. Red and Black are eager to gobble up the spilled bits! 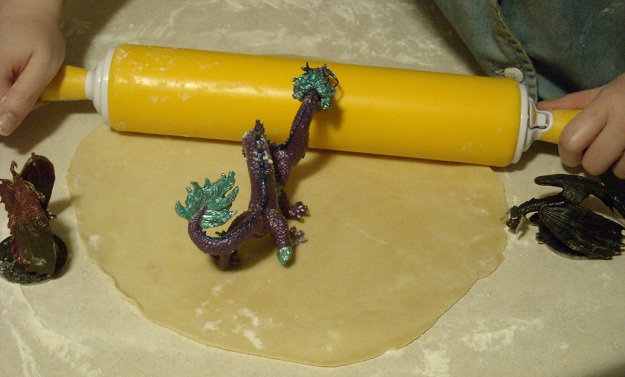 With the pie filled, we just need to top it off with one more crust. Hi-chan and I are having fun rolling it out, while Red and Black are arguing about whether it's big enough yet. 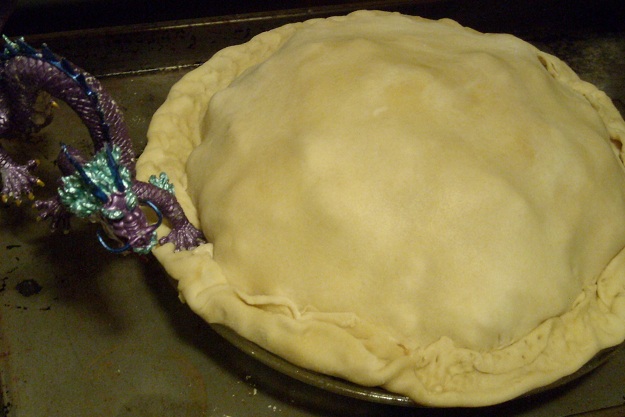 Once we draped the top crust over our piled-high filling, we rolled the excess of the bottom crust up to meet the top crust and create the edge of the pie. Hi-chan is pressing the crusts together, creating a much more interesting pattern with her paw than a fork would make. 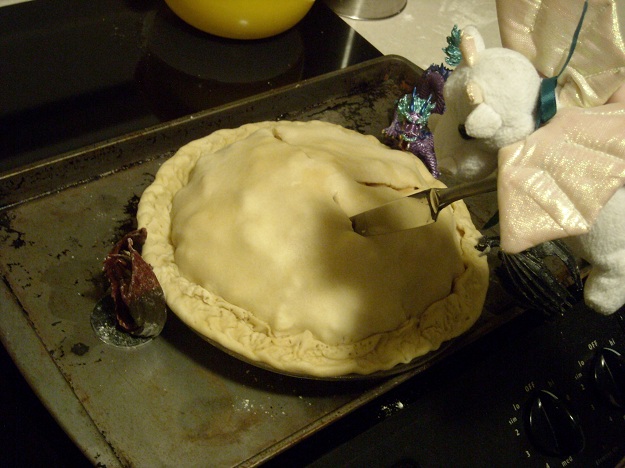 With the crusts neatly joined, we're about ready to put the pie in the oven, but first we need vents for the steam to escape! Everyone pitches in to hold the pie still while Ruth cuts a few vents into the top. 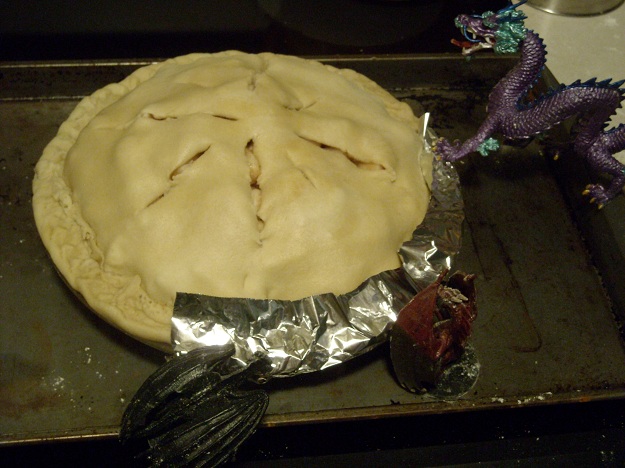 Red and Black are helping Hi-chan put strips of foil on the edges of the pie, to protect the outer crust from cooking too fast, and thus getting burnt. They sell reusable pie shields that serve the same purpose, but I don't happen to have any, so foil makes an excellent substitute. 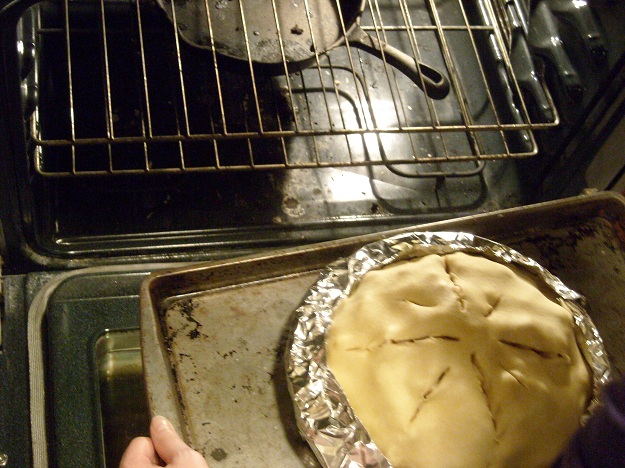 With the vents cut and the foil in place, the pie is ready to go into the oven! I've put it on a baking sheet to make it easier to move without risk of spilling.
The cast-iron frying pan is in the oven to keep the temperature more consistent--we have an electric oven. 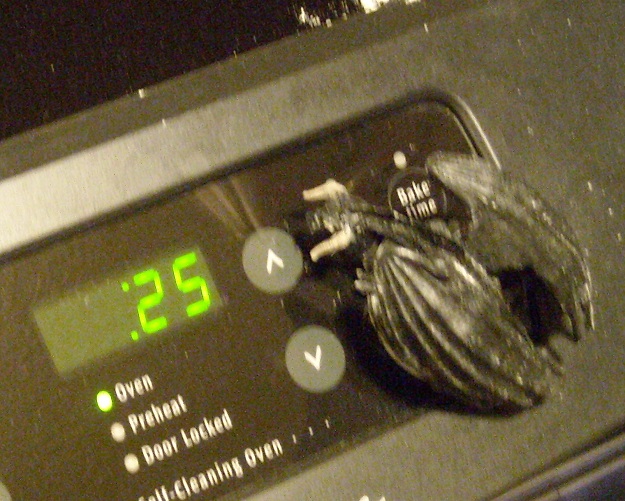 Black sets the timer for 25 minutes, as the pie needs to bake for about 40 to 50 minutes, but the foil needs to come off for the last 15 minutes. This will remind us to take the foil off.
It's about now that I remember we forgot to dot the filling with butter before adding the top crust. Oh well, the pie will still be good. 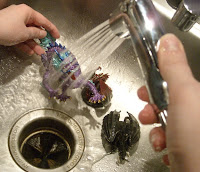 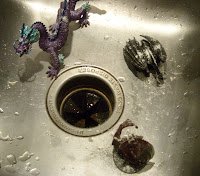 Hi-chan and the little ones got all covered in flour again. Plenty of time to clean up now, though, so they get a shower! Hi-chan loves the water. 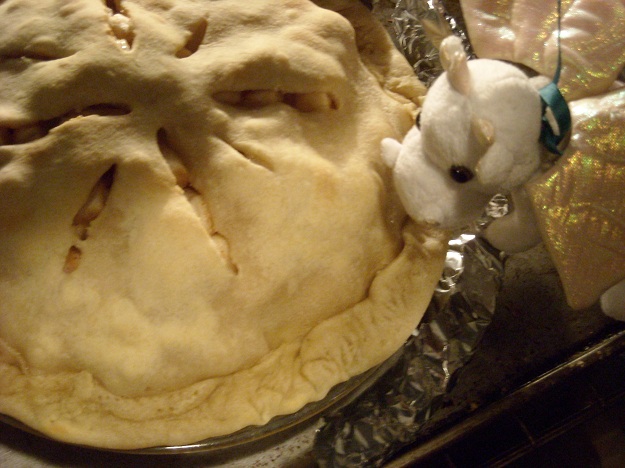 The timer went off! Time to take the strips of foil off the edges. Ruth has that well in hand. If you're not a dragon, you don't want to touch the metal pans or the pie itself with bare skin! Dragons are naturally heat-resistant, it comes of having the ability to breathe fire--or possibly of having scales, in Hi-chan's case. 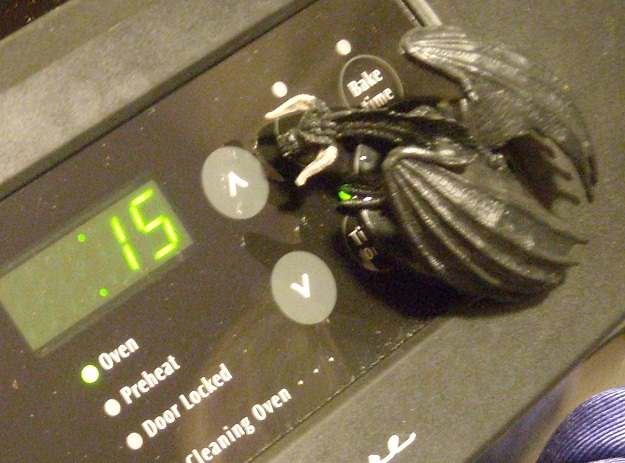 Black sets the timer again, for 15 minutes this time so the pie can finish baking. 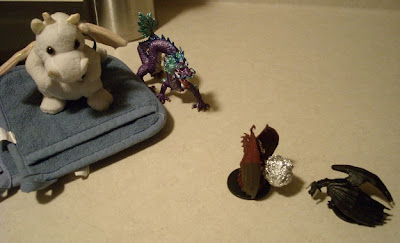 Waiting is the hardest part. Everyone wants to eat some yummy pie, but it's not finished yet. The cleanup is, though. Ruth made a ball out of the discarded foil from the crust-protecting strips, hoping to distract Red and Black. It seems to be working, as they've started up a game of catch. 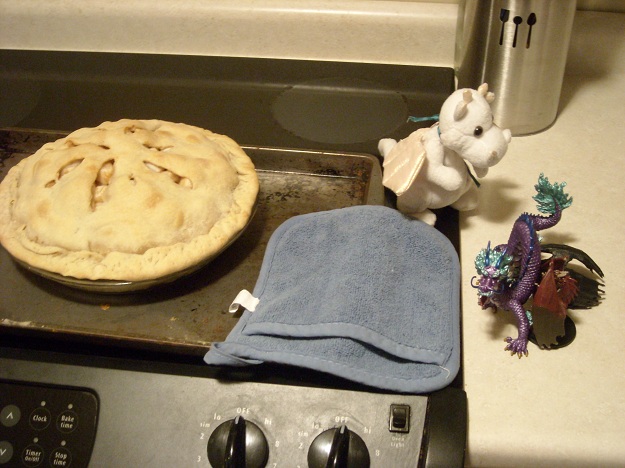 The pie is done, yay! I pulled it out of the oven and Red and Black immediately abandoned their ball to go running over for pie, except it's still piping hot! Hi-chan cut them off before they could hurt themselves. "You have to wait for it to cool off a little first!" scolds Ruth. I cut off the whining by setting the timer for 10 minutes and promising that when it went off again we could all have some pie. 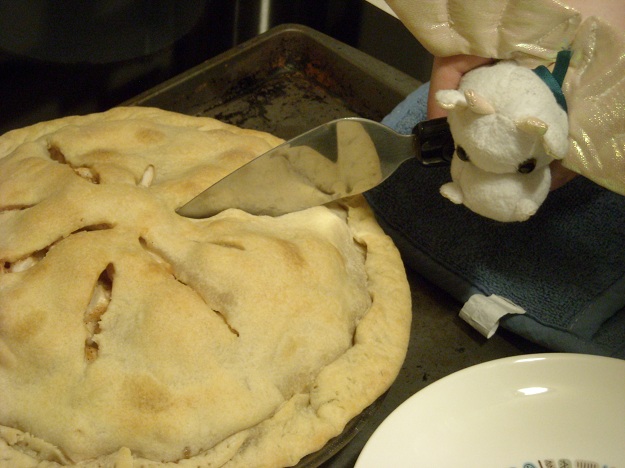 Ruth gets to do the honors of extracting the first slice of pie! The pie server doubles as a knife for cutting the pie. 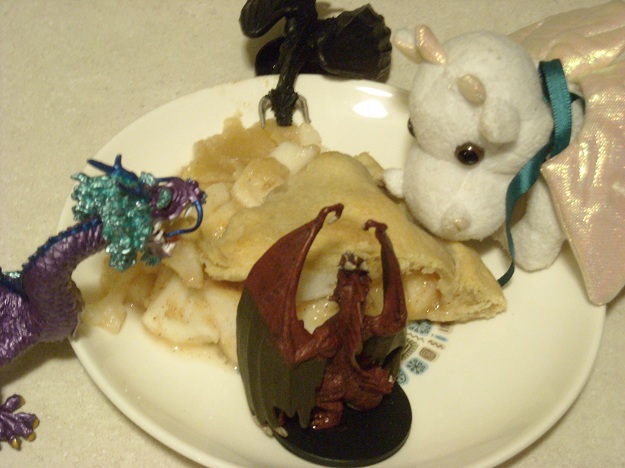 Pie's here! Dig in everyone! Mm, yummy! Does anyone want some whipped cream to go with it?
Posted by Unknown at 4:00 PM