Today's recipe is Apple Pie! Well, at least we'll be preparing the crust and getting the apples cut today. Looking through the number of pictures, I decided it might be wiser to split the recipe in two parts. We'll craft the filling and put the whole pie together (and eat it!) tomorrow.
Our pie crust recipe comes from the Taste of Home cookbook, and is simply called "Classic Pie Pastry". I've chosen this one because it was very easy--only four ingredients. My mom always used frozen pie crusts because she didn't like making them.
Let's get started! 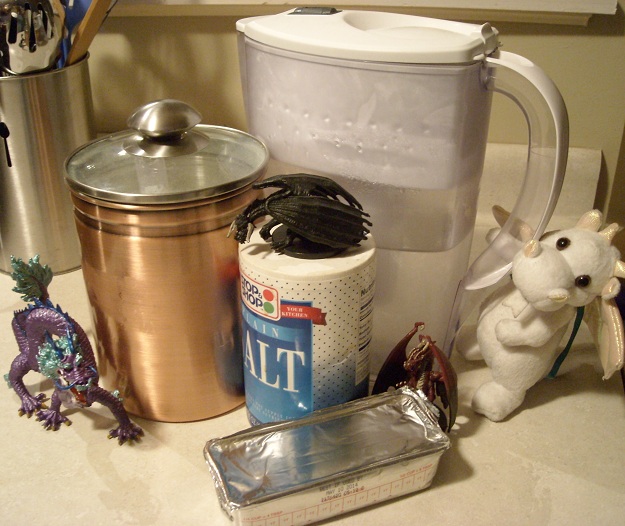 There are only four things we need to mix for pie crust. Ruth brought the water. Hi-chan has the flour. Black has decided that the salt makes a good vantage point, and Red has dragged in the stick of shortening. We like to use stick-shaped shortening because it's easier to measure. 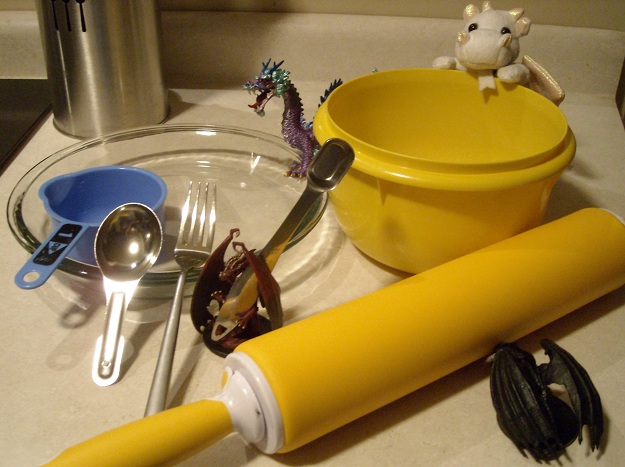 Of course, there's more equipment that we need than ingredients. Then again, we won't need the rolling pin or pie plate just yet. According to the recipe, the dough will want to sit in the fridge for a bit once it's mixed, so that it becomes easier to work with. Black and Hi-chan are a little ahead of the game. Ruth has brought our mixing bowl--medium-sized is good, enough room to work in but not huge. Red has taken advantage of Hi-chan bringing in the pie plate, as it makes a good place to line up measuring and stirring equipment. 1 cup measure, tablespoon, a fork for mixing with, and the 3/4 teaspoon measure. 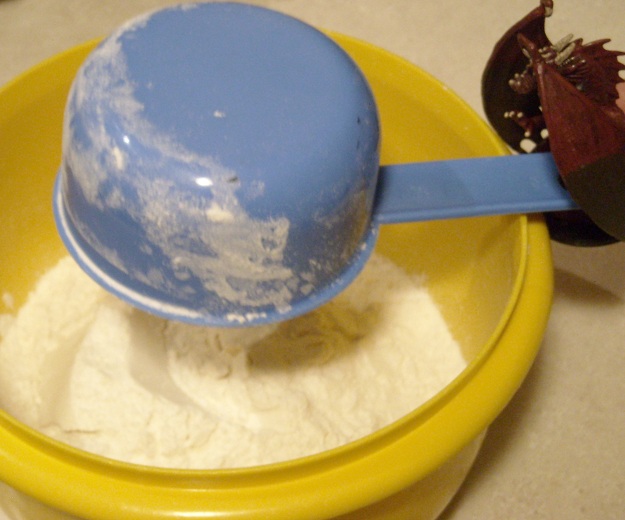 Let's get right into it! Red manages to add 2 cups of flour (280g) without any mishaps or spills--at least not anything major. 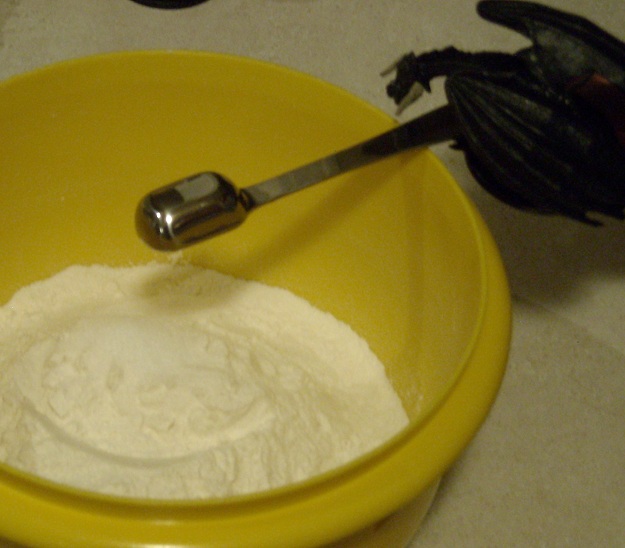 Black adds 3/4 teaspoon of salt. White one white doesn't show up very well, but the salt is there. 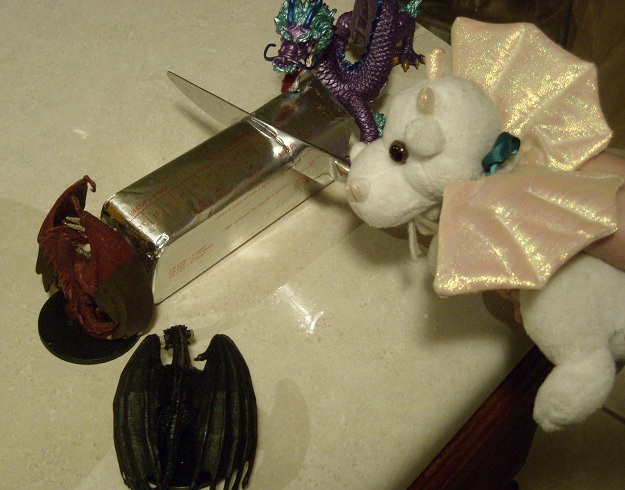 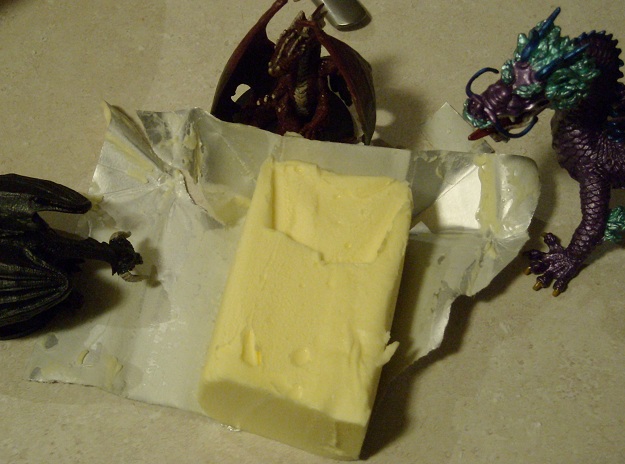 We don't need to add the paper, so Hi-chan and the little ones are having fun unwrapping the shortening, sort of like opening presents! 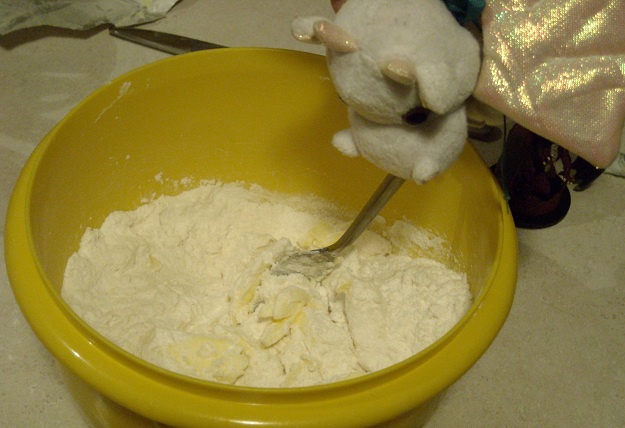 With the paper gone, we dump the shortening into the bowl. Since the recipe asks for the shortening to be 'cut in', we use the fork to break it into small chunks, almost as though we were getting butter out of a tub to spread on toast, except that nothing comes out of the bowl. You really do want to use a fork for this, it makes the process a lot easier. Most mixing spoons have thick edges that will 'mash' more than 'cut'. Ruth is very focused, as this does take a bit of concentration to get right, especially when your mixing bowl is as big as you are! 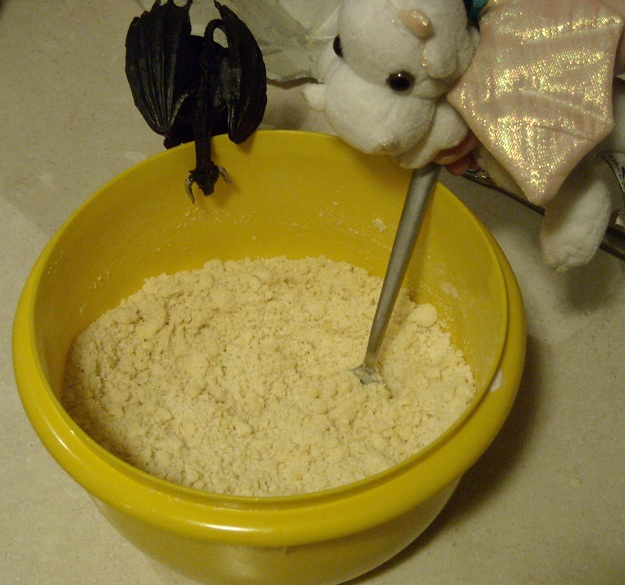 We want to combine everything until we get a crumbly mixture, which should look about like this. It sort of looks like crumb topping now, doesn't it? We're not quite done yet, though. 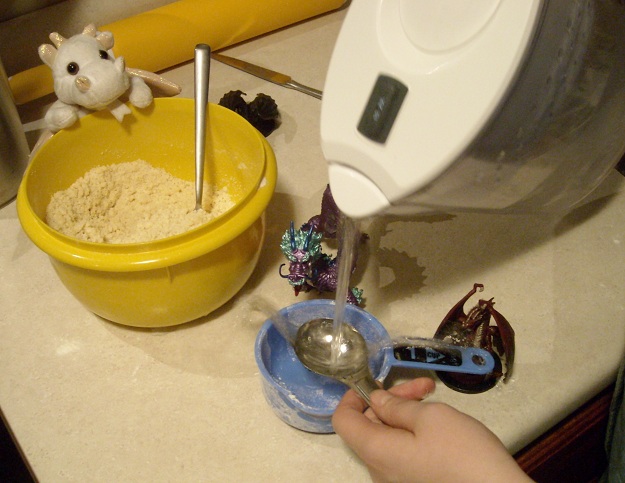 Now we get ready to add some water! Of course, I poured too fast and it splashed all over. Not a problem, though, it's only water. Make sure you're measuring into a tablespoon, as you only want a little at a time. 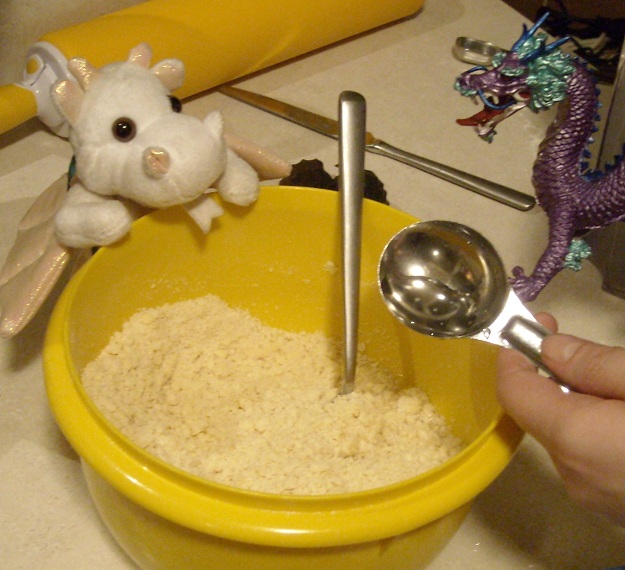 The recipe calls for about 6 to 7 tablespoons of water, and the measure is given that way because you want to add only one tablespoon at a time. If you add too much water, your dough will be gloppy and not roll out  well. If you don't add enough water, you have crumbly dough that won't hold together at all. Hi-chan is helping me add the first tablespoon of water, while Ruth holds the bowl in place. 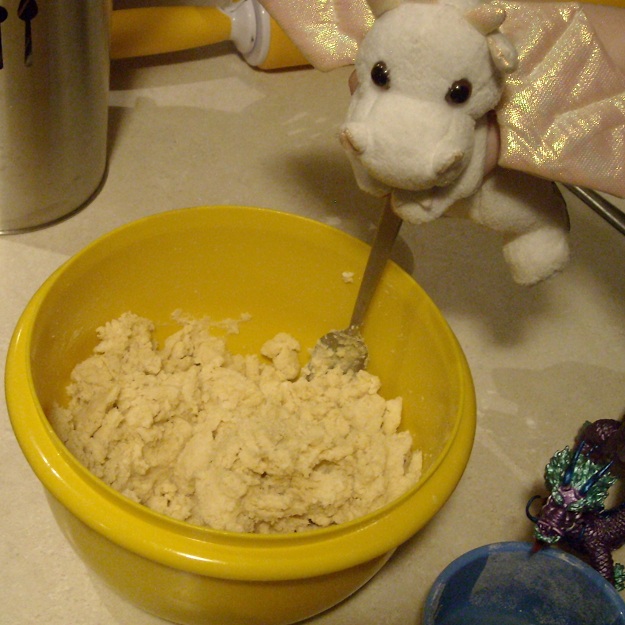 As you stir in the water, you'll notice it starts to actually look like dough. Keep going a little at a time. Patience is the key to excellent pie crust. We're looking for the dough to start to ball up on its own. This isn't quite there yet. 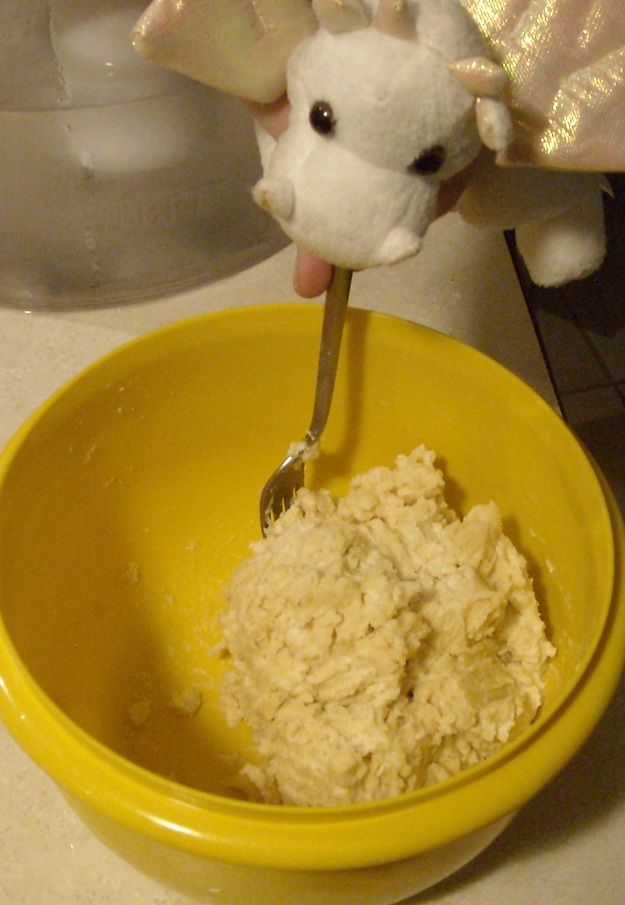 This is what it looks like when the dough begins to ball up. See how it sticks much more to itself than to the bowl or the fork? It's really coming together now!
"To make sure you get it right," Ruth says, "you have to test it. Pull out a little bit and play with it. If it moves well, then you know you're close."
"How do you know for really sure, though?" Red asks.
"You have to taste it, actually," explains Ruth.
"Really?" Hi-chan looks rather skeptical.
"Taste it?" Black chimes in. "Oo, let me! Please?"
"No fair, I asked first!" Red pouts.
"And how will you know what you're looking for?" demands Hi-chan.
"Needs a little more water."
Ruth glances up at me. "A bit dry, is it?"
I nod. "Only a little, though. I think this is our last tablespoon." 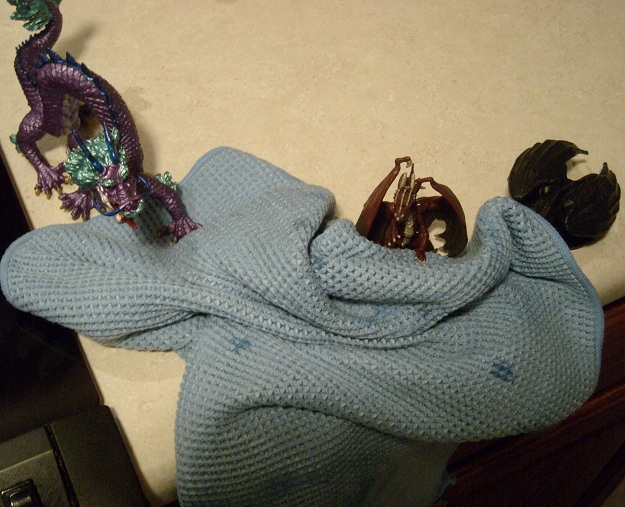 The ball of dough is all set, so we cover it up with plastic wrap and set it in the fridge for about a half-hour to make it easier to handle. In the meantime, we better clean up all that spilled water! It actually made quite the mess. Hey, that's no reason to go throwing the towel on the floor!
"But it's wet and we're done with it!"
"If you leave it in a heap on the floor, it will get stinky! Let Miaka throw it in the laundry!" Hi-chan scolds. 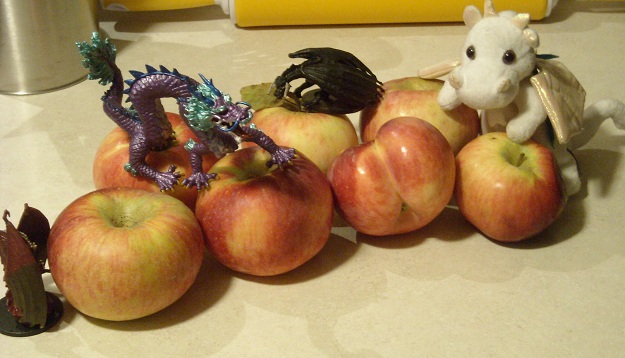 With the counter cleaned off again, it's time to start getting things ready for the filling, which means apples! We have a good half-dozen fairly sizable apples from the farmer's market. We'd meant to go apple-picking, but my back wasn't cooperating. This is plenty of apples for a pie, though! Archi bought about 4lbs, which is nearly 2kg! The cores have to come out, and so do the bruised spots (they got a little banged around) so our actual yield of cut-up-apple will be a bit less, but still plenty. 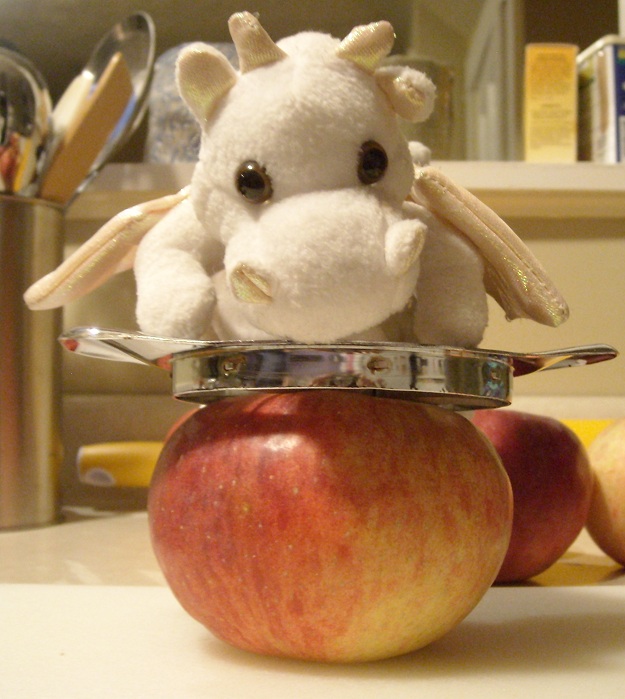 This time it's Ruth who's jumping ahead of things and skipping a step! I don't think that corer is going to work on that apple, either. It's too big an apple! 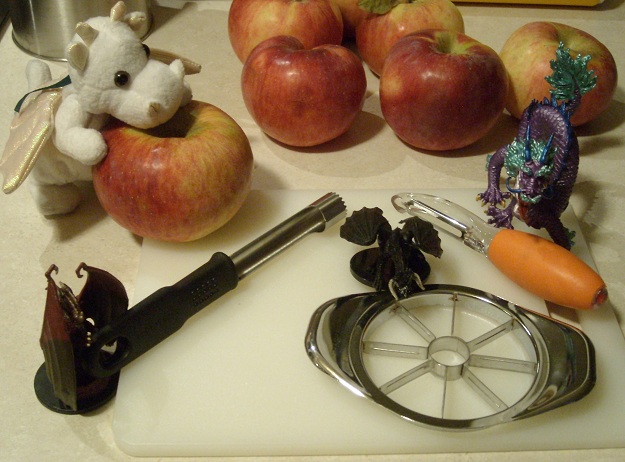 Here we have things we need to prepare the apples! Hi-chan brought the peeler, and Red and Black have each brought a different type of apple corer. Red's will only remove the core and will work on any size apple. Black's will also cut the apple into sections, but won't work on the largest of our apples, like the one Ruth is hanging on to. I'll bring the sharp knife over in a bit, and we've already got everyone on the cutting board. Let's do this! 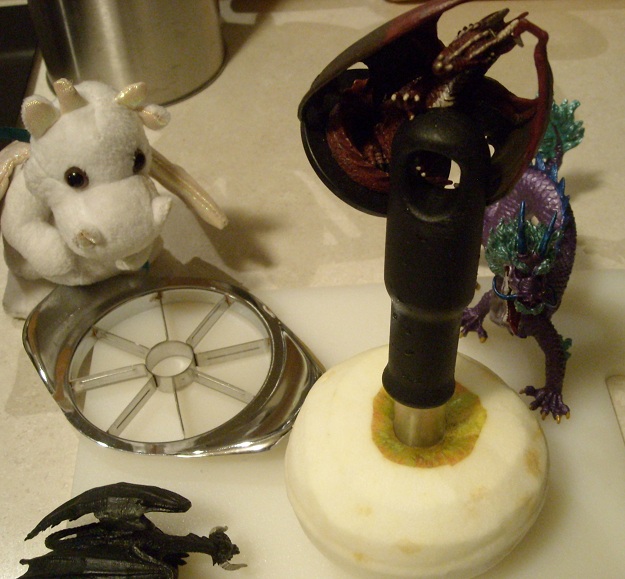 Of course, due to dexterity issues, I get stuck with the job of doing all the peeling and removing bruised spots. Once I peeled the largest apple as best I could, I positioned it on the cutting board so Red could spear it with the corer! Looks like everyone's having fun. Although Ruth might still be pouting... 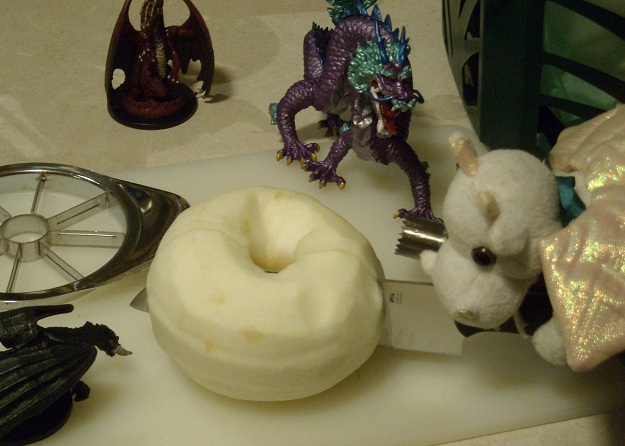 Well, Ruth cheered right back up when I asked him to cut the apple up into chunks with the knife. 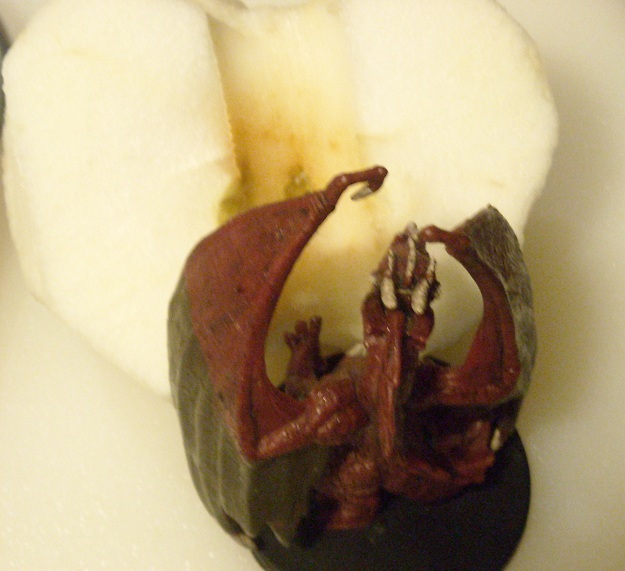 Getting the corer through the apple doesn't necessarily mean we got all the core-bits out of it. Sometimes we miss some seeds. Red is perfectly suited to making sure all the seeds are out. 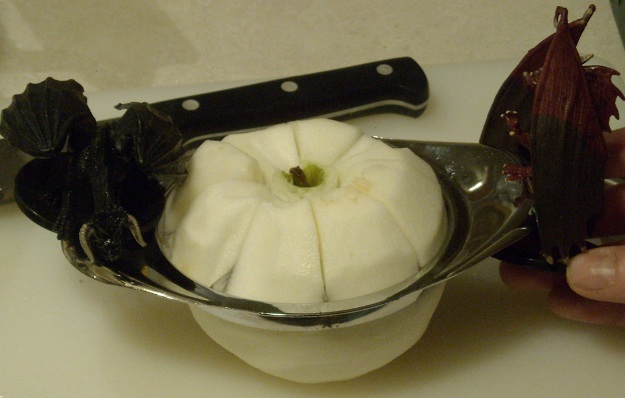 Here we have a smaller apple, which works nicely in the slicer-corer. Red and Black have this job handled quite well. Teamwork! 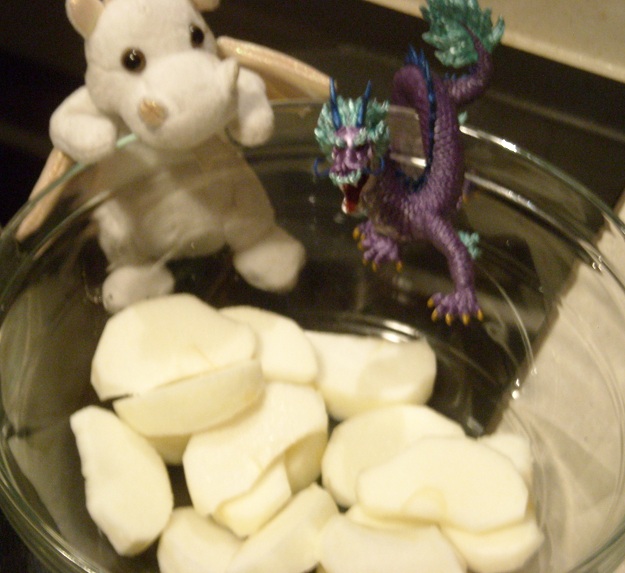 Slowly but surely we'll fill up this bowl with the apple slices! Ruth and Hi-chan can hardly wait!


See you tomorrow to make the filling and bake up our pie!
Posted by Unknown at 4:00 PM