Today's recipe is Sablée Cookies!
I'd been meaning to make these for a while, since they looked interesting. I got a cookie press for Christmas and the cookbook I got the recipe from (Baking, by James Peterson) had instructions on how to make them with a cookie press.
"Ah, this is a sweet crust for tarts," Ruth said, looking at the recipe. "I've never tried making cookies out of it, though. Generally I use it for tarts, especially those made with fruits that have more of a bite. It's also quite good for cheese tarts, and is the crust for Sugar Pies."
"Sugar Pies? That sounds interesting," I remarked. "I don't think I've heard of that pie flavor before."
Ruth laughed. "You have to have a well-developed sweet tooth to properly enjoy them. Sugar Pies are quite popular with some of the Fae who visit often, especially those whose primary task is to tend gardens. They're nicknamed 'Flower Fairies'."
"Do they help the bees?"
"They often keep bees, yes," Ruth explained. "I think you're picturing them a lot smaller than they actually are, Miaka. Flower Faries are... hmm, I'm not sure I have a good reference in your world. Well, an adult Flower Fairy would probably not be able to see over your kitchen counters, but would still be comfortable in one of your chairs."
"Child-height?" I suggested. "Let's see, you use Imperial, so... about 3 feet tall?" (Just under 1 meter.)
"Yes," Ruth agreed. "That sounds about right. The tallest of them is a little bit shorter than the twins, although that reference doesn't carry to your world. Not that any of this has much at all to do with the cookies."
"I'm very good at getting off track, Ruth. We should get started, though."
Here we go! 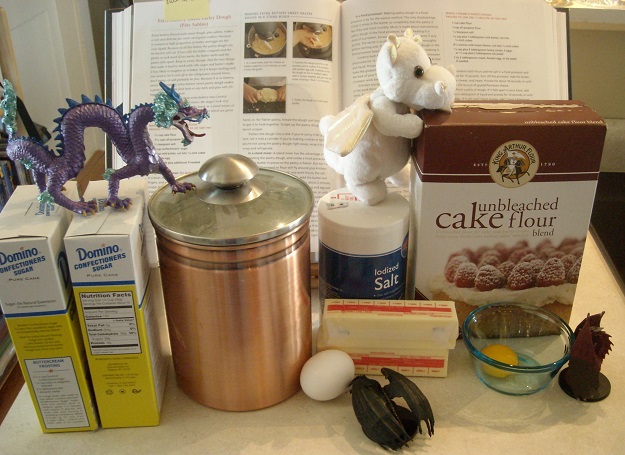 You can see the cookbook in the background as we go about getting everything that goes in these cookies together. Ruth has the salt (he's standing on it) and the cake flour. Hi-chan is making her way across the powdered (confectioner's) sugar to the canister of all-purpose flour. (One of the boxes of powdered sugar was almost empty and I wasn't sure there would be enough in it.) Black is herding the whole egg into the two sticks of butter, and Red has the egg yolk. One of the eggs broke as I was trying to take it out of the carton, but the yolk was still just fine, allowing me to salvage it. 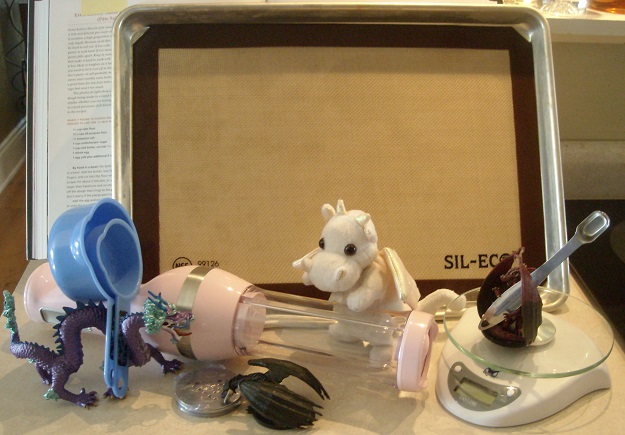 We'll be using the stand mixer with its paddle attachment and the larger bowl. Since the mixer takes up most of the counter it's on, here's everything else we'll need.
Red has the measuring spoon, as usual. He seems to like the scale; apparently the glass is comfortable to stand on. Hi-chan has brought the measuring cups and is rather curious about the cookie press. Ruth is rather intrigued by this tool. "I don't have one of these at home. I've seen them, but ours look a bit different," he says. "Perhaps I should look into purchasing one."
"What do these discs do?" Black asks.
"Those go in the end of the cookie press. The dough is pushed through them to make fancy designs," I explain. "You'll see it in action later."
Behind everyone is the cookie sheet, with the sil-plat mat. I haven't had a chance to try out the mat yet, and this seems a perfect time. Normally I use parchment paper for cookies, but that won't work well with a press, as the dough will stick to both paper and press, causing a mess when you try to pull the press away. 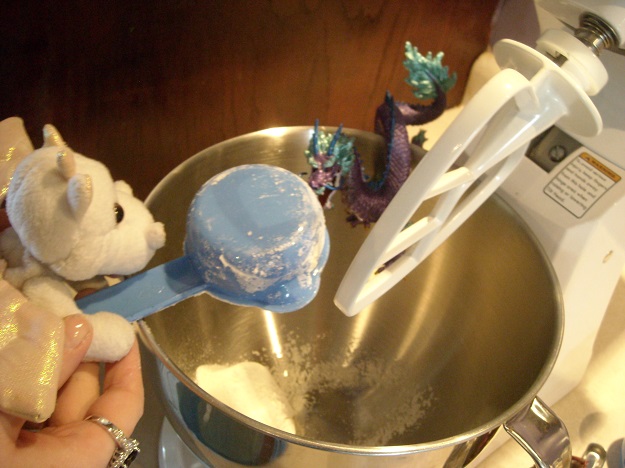 Ruth adds 2/3 cup (80g) cake flour to the mixer bowl to get us started. Hi-chan has found a nice perch on the rim of the bowl. 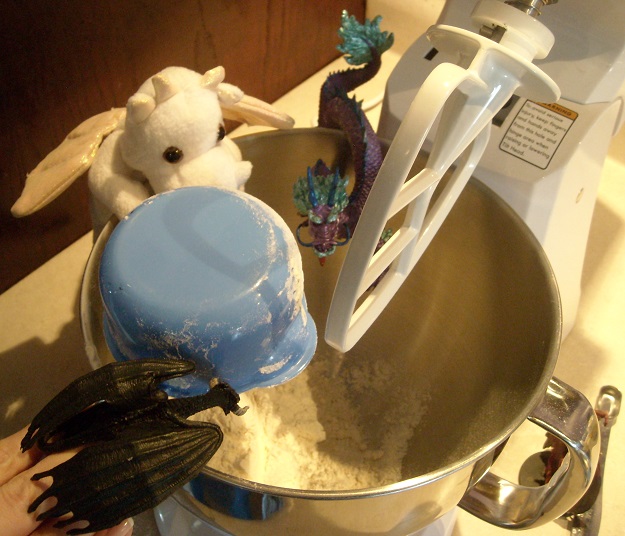 Black gets to add 1 1/3 cup (160g) all-purpose flour, for a total of 2 cups (240g) of flour. The mix of cake and all-purpose flours is to make sure that the cookies come out nice and smooth. You may need to adjust the proportions depending on the gluten content of the flour you're using. 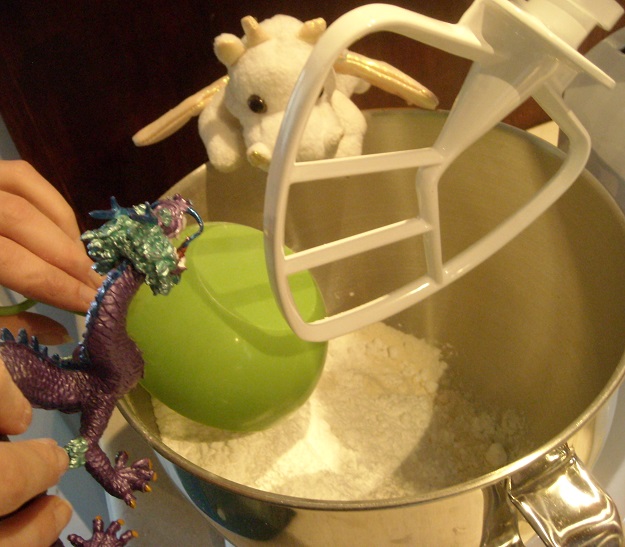 Hi-chan takes up the measuring cup next, adding 1 cup (100g) of powdered sugar. It's really hard to tell what's sugar and what's flour in the bowl. 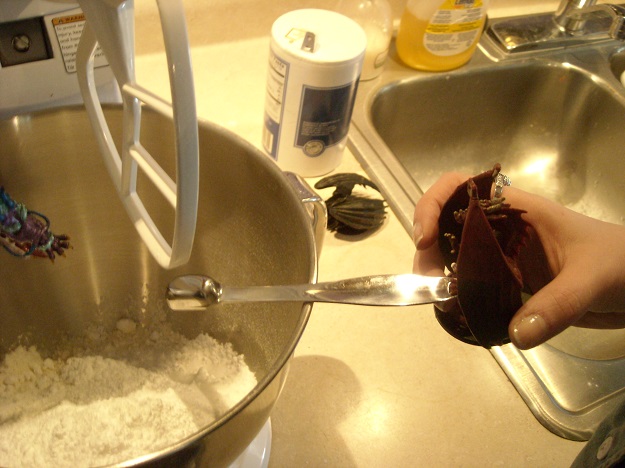 Red, Captain of the Measuring Spoons, adds 1/2 teaspoon salt. He also objects to my teasing, apparently not finding it as funny. With all the dry ingredients in, Ruth turns on the mixer to combine them. Everyone else has found a perch of sorts where they can watch the mixer go. Watching things swirl is entertaining, especially when no one is exhausting muscle power to do it. 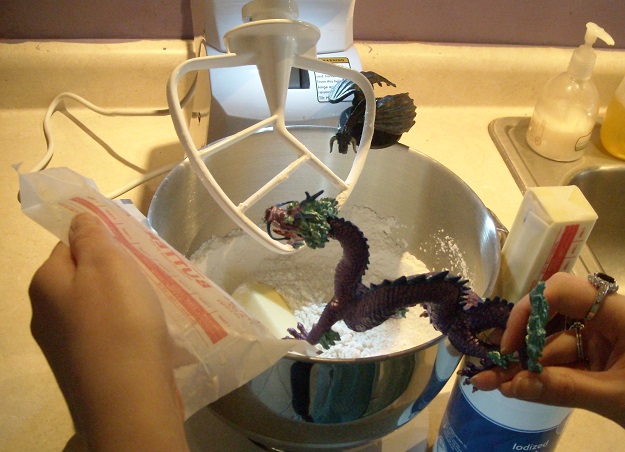 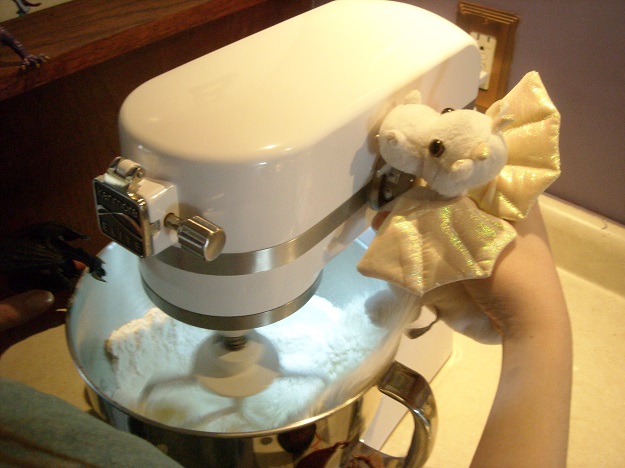 With the butter added, it's time to mix it in, so Ruth turns on the mixer on low speed. 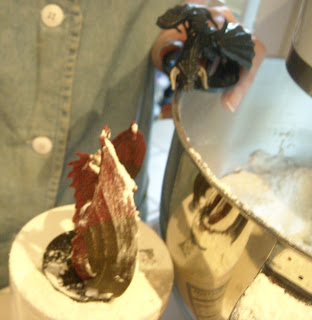 Except this turns out to be a problem, as the flour mixture sprays out. He promptly turns it back off. 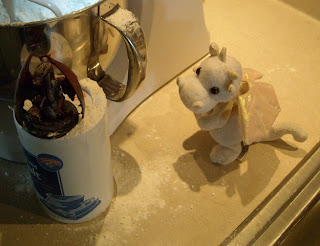 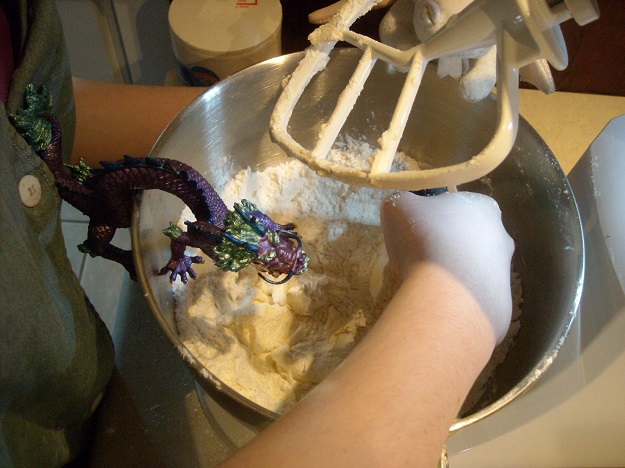 While Red is getting rinsed off, I take a pastry blender tool and cut the butter into the flour mixture, under the watchful eyes of Hi-chan and Ruth. "There. I think we can try again without it going all over the place."
"Please add a little more sugar and flour, Miaka," Ruth asks, "we did lose a good bit with that mishap."
"Of course," I assure him, grabbing the box of powdered sugar. 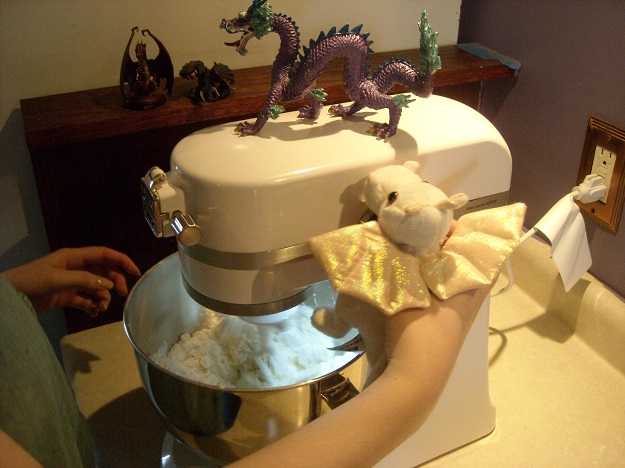 With Red clean and the mixture corrected, it's time to try turning the machine on again to mix it up. It should work a lot better this time. 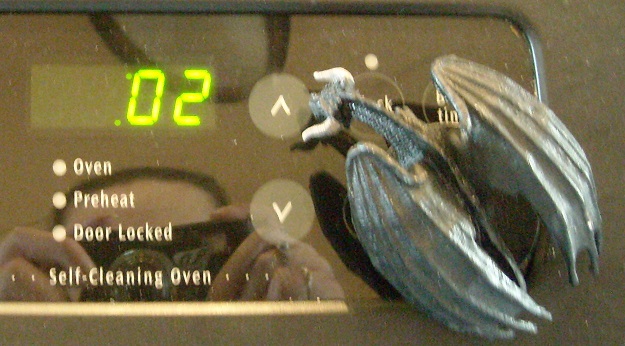 Black sets the timer for 2 minutes, as it should take about that long to get the butter fairly well mixed in. 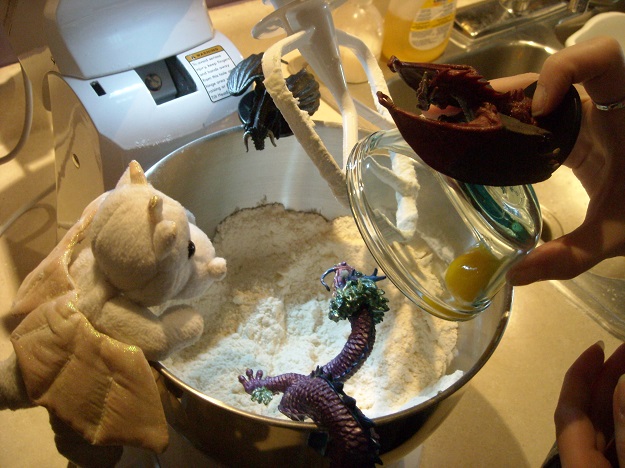 Now we're ready to add eggs. Red is having a little trouble adding the egg yolk--it doesn't want to come out of the prep bowl! 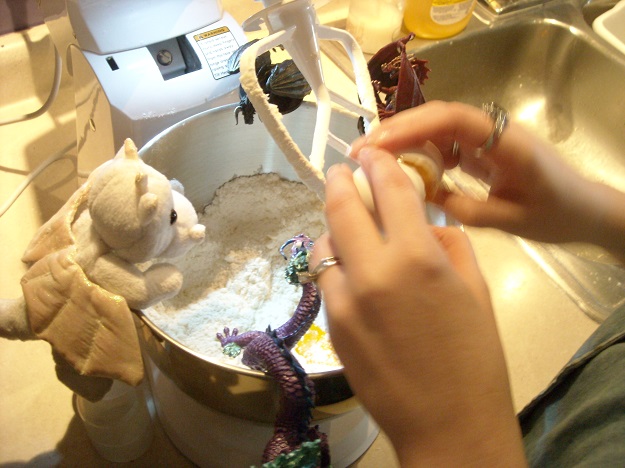 Once Red finally gets the egg yolk into the bowl, I add in the whole egg. 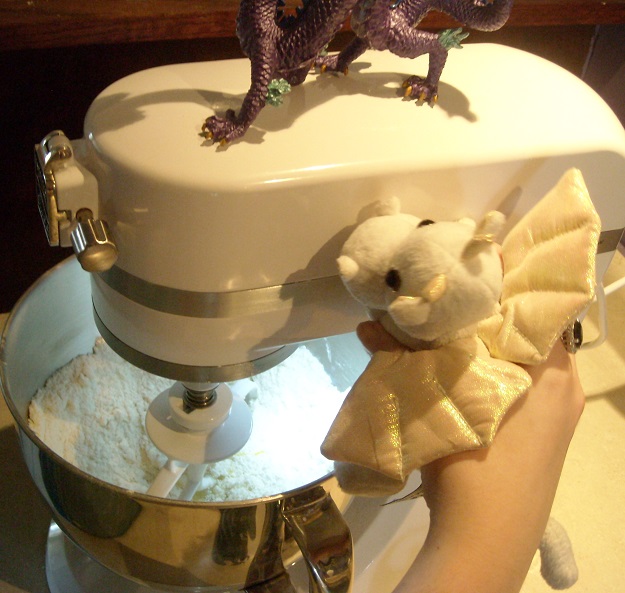 Now we're ready to mix it all together! Ruth turns on the stand mixer to low while Black sets the timer for 2 minutes again. Ruth will keep an eye on things and gradually edge the mixer speed up to medium-low as everything is incorporated. We don't want more flying-powder mishaps! 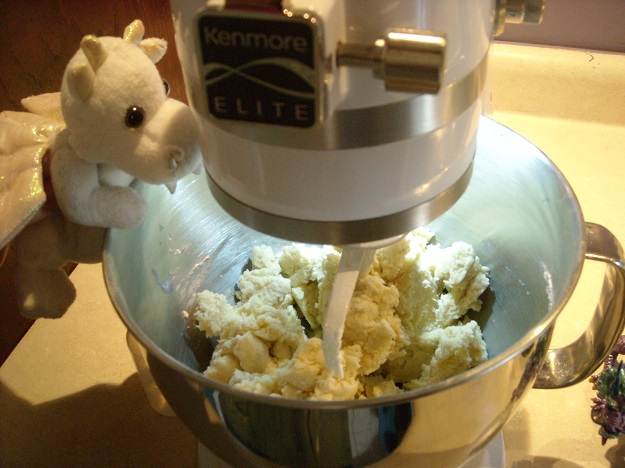 After about 2 minutes, the dough has come together! Ruth turns off the mixer and moves to get a closer look.
"Excellent," he says. "It's ready for shaping." 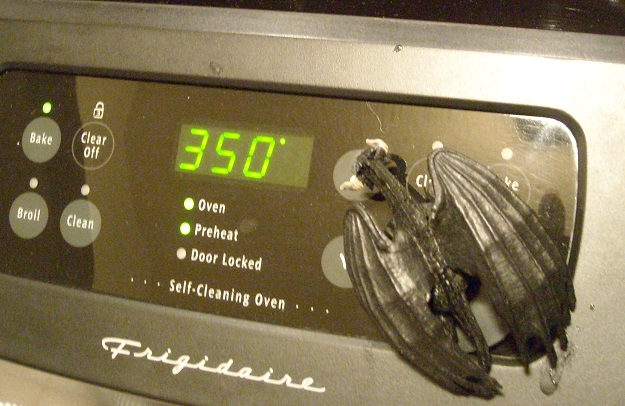 Black goes to pre-heat the oven. There's plenty of things to be done before we can get the cookies into the oven, so it should finish pre-heating about the time we're ready to put the cookies in. These cookies bake in a 350°F (180°C) oven. 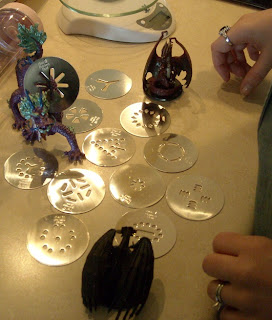 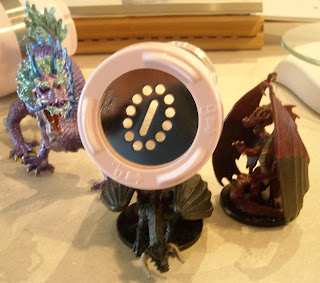 The first thing we need to do is pick out a disc to put in the cookie press, which will shape the cookies. Hi-chan and the twins poke through the discs available, each having various preferences and suggestions, though they all immediately rule out the cone-shaped tree, declaring it "Too Yule; wrong time of year for that." In the end, everyone agrees on Black's favorite, which looks a bit like a coin and should make some pretty cookies. 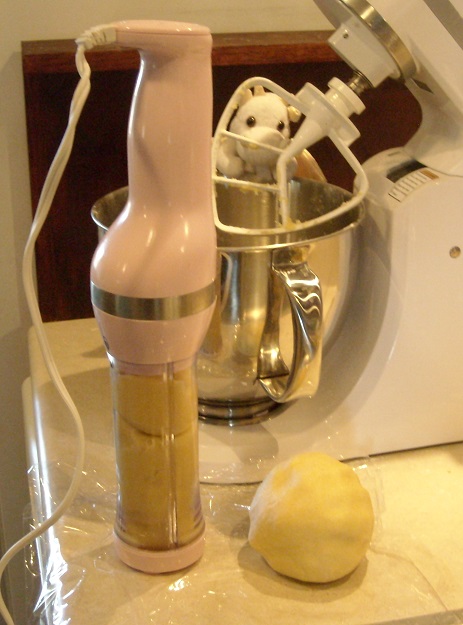 With the disc in place, the next order of business is to load up the cookie press with dough. Ruth supervises this from behind the stand mixer. Only about half the dough will fit in the press at once. I've rolled the rest into a ball to add later. 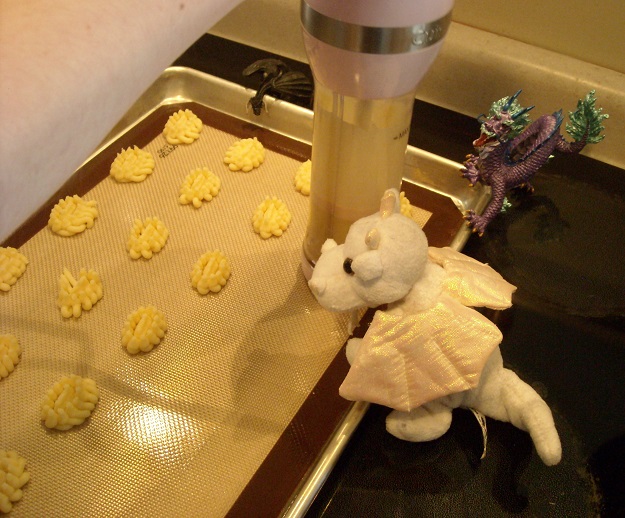 The press is a bit too big for Ruth to properly wrap his arms around, so the dragons all gather around to watch me pop out cookies. This is the first time I've used the cookie press, so I'm still working out how to operate it properly. Well, even if the cookies end up in funny shapes, I'm sure they'll still taste delicious! 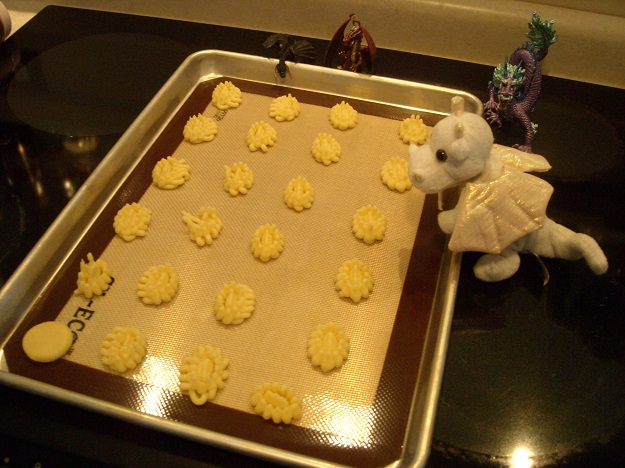 Here I've pressed out about as many cookies as I think can fit reasonably on the tray. I'm starting to get the hang of the press.

Ruth helps me slide the tray of cookies into the oven to bake. Sorry about the blurry photo.

Black sets the timer for 12 minutes, though these cookies may need as much as 14-15. Bake the cookies until they're just slightly starting to brown at the edges. 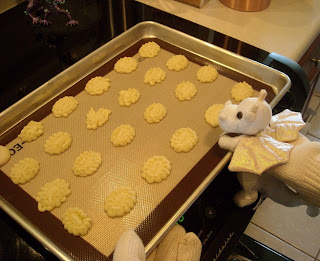 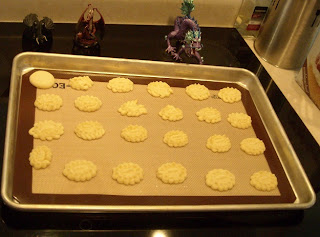 Here we have finished cookies, with just the lightest hint of brown at the edges. Excellent! They look really tasty, don't they?
"Shouldn't we get them off the baking tray so we can run another batch? There's still a lot of dough left," Hi-chan points out.
"Good idea," I tell her. "Let's get the cooling racks set up." Everyone hurries to help. 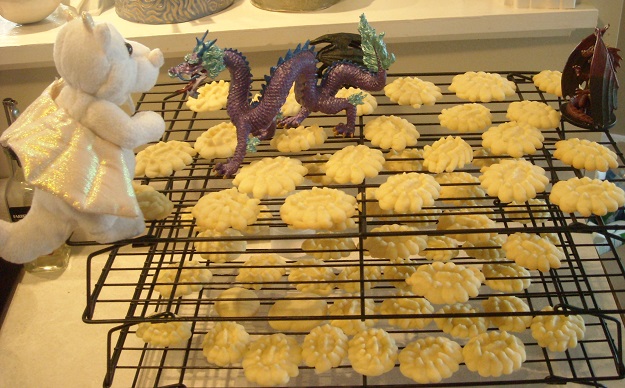 All the cookies are done, now! So here we have the wire cooling racks loaded up with tasty sablée cookies. Black is trying to sneak a bite.
"Wait for them to cool off all the way," Ruth scolds lightly. "You'll enjoy it more if you don't burn your tongue."
"It's a lot easier to taste things with an unburned tongue," I remark. "Temporarily-dead taste buds are the worst part of a too-hot drink."
"Wouldn't taking a cold drink fix it?" Red asks.
"Not quite, Red. The cold will help to kill the pain, but it won't get the dulled taste buds working again."
"That doesn't sound like fun at all," Hi-chan remarks. "Why would you drink something that is too hot?"
"Generally by accident." 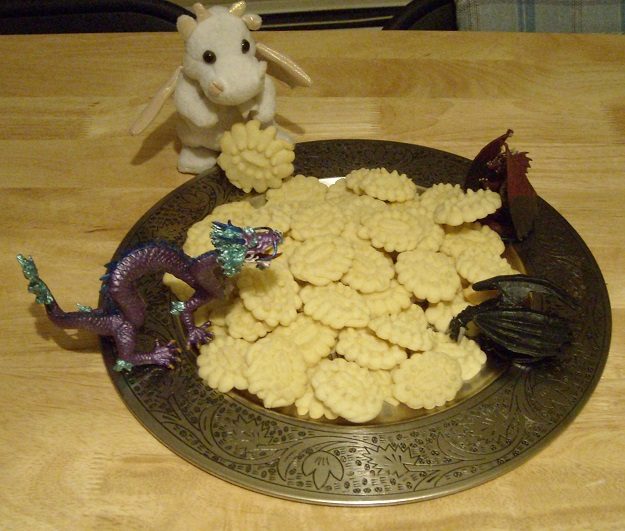 Cookies cooled off and plated up! Om nom nom, yummy! Everyone is too busy chowing down to make any comments.
Posted by Unknown at 4:00 PM